Microsoft dives in to quell crime in cities

Durban 01 July 2016—Technology giant Microsoft is keen on partnering with various stakeholders to ensure that cities are made safer for all inhabitants.  At the same time a ground breaking ‘State of Urban Safety in South Africa Report 2016’ was launched on Wednesday attracting huge interest. Addressing a session at the ongoing African Forum for Urban Safety two senior officials of the company Mr. Sandile Mahlaba and Ms. Nashreen Hofmeester said ultimately Microsoft wanted to be the partner of choice for any city that needed to use IT in improving urban safety and security. The organisation is doing that through its CityNext initiative.

Microsoft CityNext is a partner-led initiative that empowers cities to be more sustainable, prosperous, and economically competitive—with a simplified approach. It helps cities unlock their potential by delivering innovative digital services that can help citizens lead safer, healthier, and more educated lives.
“Cities can tap into the solution portfolios of Microsoft and our partners and innovate at their own pace, deploying real-time solutions that can interoperate with and improve upon existing IT investments. These transform their operations and infrastructures; engage citizens and businesses; and accelerate their economic development and environmental sustainability,” Microsoft says.

Mahlaba said they were interested in making cities safer because therein lay the very reason for the existence of the urban centres. “When the city is safe it will attract investments which will translate into jobs and provision of other services,” he said. According to Ms. Hofmeester, Microsoft is working on five levels to achieve a Smart City. These are: digital cities, safer cities, sustainable cities, healthier cities, educated cities and smaller cities. She said the response has been very encouraging. Meanwhile, the fear of crime does not necessarily mean the existence of crime, the new report says. In an interview, one of the authors of the report Geci Karuri-Sebina said they hoped the report would be used for better planning by South African cities.

“This is the first time that this data on crime is being presented in Africa. Like many countries South Africa is shy to present such data but we hope after this publication we will see more such publications in the future,” she said. Ms. Karuri-Sebina said her team at the Urban Safety Reference Group would be more than willing to extend a helping hand to other African countries seeking to research and publish a similar report. In his presentation Juma Assiago from UN-Habitat’s Safer Cities Programme gave the background on how the campaign for safer cities has evolved over the years. He said it has been a long journey but for the commitment of UN-Habitat which has now seen the efforts bearing fruits. Nairobi Deputy Governor Jonathan Mueke appraised the meeting on the successes of the Safer Nairobi Initiative. Some of these include enhancing the right to the city. Revitalization of public spaces and programming of parking lots for use as public spaces. “What we have learnt is that stakeholder involvement is crucial for sustainable urban safety and security,” he said. 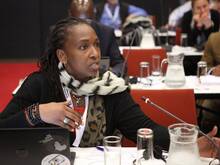