Mayors renew their commitments towards liveable and sustainable cities

Singapore, 18 July 2016 — Held in Singapore this week, World Cities Summit (WCS) and WCS Mayors Forum saw some 110 Mayors and city leaders representing 103 cities from 63 countries and regions from around the world discussing liveable and sustainable city challenges and integrated urban solutions. At the combined Opening Plenary of the biennial World Cities Summit, Singapore International Water Week and CleanEnviro Summit, the Deputy Prime Minister and coordinating Minister for Economic and Social Policies, Mr. Tharman Shanmugaratnam, highlighted the importance of social resilience and technological innovations and said that Singapore continues to actively engage in Habitat III process and participate in Quito.

Prof. Tommy Koh, Ambassador-at-large, Ministry of Foreign Affairs added that Singapore shall further strengthen partnerships with UN-Habitat. Speaking in his capacity as the Secretary General of Habitat III Dr. Joan Clos said, “Habitat III should generate a change of mindset in approaching urbanization as a driver for sustainable development and underpinned empowering local governments.”

Minister Wong also said, ‘at this year’s Mayors Forum – we’ll have a declaration that will be linking the discussion today with the Habitat III process. So whatever we are discussing here will not be done in isolation from the broader global conversation that is happening on urbanization and we hope that through our discussion today, we can give some useful suggestions and contributions to the new urban agenda that will eventually be adopted at Habitat III.’ (Read full statement here)

The World Cities Summit is jointly organised by Singapore’s Centre for Liveable Cities and Urban Redevelopment Authority. Key highlights of the Summit included the Lee Kuan Yew World City Prize, and the annual WCS Mayors Forum. During his first visit to Singapore, Dr. Clos visited Urban Redevelopment Authority and Housing Development Board – a past UN-Habitat Scroll of Honour winner and appreciated the importance of urban legislation that allowed the government to execute plans working closely with planners and people. 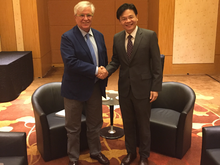 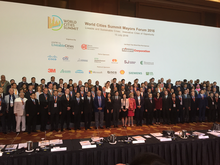