This event, at the Third United Nations Conference on Housing and Sustainable Urban Development (Habitat III), was paneled by Mayor Sally Lee of Sorsogon, Philippines, Mr. Tadashi Matsumoto of the Organization for Economic Co-operation and Development, Mr. Sipliant Takougang from the government of Cameroon, and Mr. Robert Kehew of UN Habitat, and was moderated by Mr. Remy Sietchiping of UN Habitat.

National Urban Policy has been recognized in the New Urban Agenda, the outcome document of Habitat III, as an essential instrument for governments and other stakeholders to contend with the challenges of urbanization and capitalize on the opportunities. In light of this, and the adoption of the Paris Agreement at the Paris Climate Summit (COP-21) in 2015, it is particularly timely to bring the importance of the inclusion of climate change in national level urban policies to the forefront of negotiations in order to guide policy makers.

This guide is based on a thorough review of existing national urban policies in more than 30 countries, and is addressed primarily to decision-makers and stakeholders engaged in the formulation, implementation and monitoring and evaluation of National Urban Policy. The recommendations serve to support low-carbon and climate-resilient urban development through effective vertical integration of climate action and collaboration between national government and local authorities. UN Habitat plans to use this tool to support interested countries engaged in the development of National Urban Policy strengthen their policy through improved consideration of climate change. Furthermore, this tool can support both the implementation of the Paris Agreement and the New Urban Agenda. 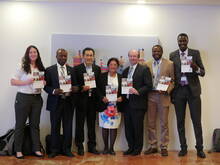