Monrovia, 19 July 2016— The government of Liberia through the Ministry of Internal Affairs (MIA), in collaboration with UN-Habitat and the Cities Alliance early this month started the National Urban Policy (NUP) in the West African country.

The policy will provide a coordinating framework to deal with the most pressing issues relating to rapid urban development, including slum prevention and regularization, access to land, basic services and infrastructure. It will also take into consideration urban legislation, delegation of authority to sub-national and local governments, financial flows, urban planning regulations, urban mobility and urban energy requirements, as well as job creation.

Deputy Internal Affairs Minister for Urban Affairs, Stephen Neufville said when completed, the policy will bring about enormous changes in the spatial distribution of people, resources, as well as the use and consumption of land. Mr. Neufville said the process is strongly linked to social and economic developments which will benefit the country. The policy will create wealth and opportunities, thus enabling better use of assets and the creation of new ones for the people.

“The country’s population is growing and as such, Liberians need to mitigate its negative (impacts) and promote an “urban paradigm shift,” but we need a coordinated approach and clear policy direction for our people,” he said. “We need to take ownership of the process, because it is a Liberian initiative. For long we have been complaining about construction in alley ways and lack of zoning. The policy will help redesign the city structure,” he emphasized. “As we approach our Vision 2030, the Policy is part of that document, because it is intended to create a middle income country for us.

We want to generate income in such a way that people will be lifted out of poverty,” he added. Minister Neufville further said the policy is not to discourage people to go away from the city, but rather to put measures in place that will improve the urbanization and economic empowerment of Liberians. Ms. Manka Bajaj, Urban Policy and Planning Officer from UN-Habitat’s headquarters in Nairobi Kenya, thanked the government for the level of work done that led to the official launch of the policy. Ms. Bajaj said Liberians need to take the policy seriously because it will create more opportunities. 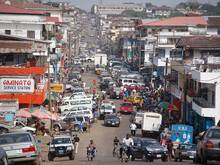