15 Dec 2015, Paris - William Cobbett, Director of Cities Alliance launched the initiative during the United Nations Climate Change Conference - COP21, explaining that the New Cities Alliance Joint Work Program on Resilient Cities brings together expertise and resources across more than 14 organisations to help cities build their resilience to the impacts of climate change and other socio-economic stresses. Cities Alliance will promote the resilience program as one of its top priorities, "Resilience is something that needs to be addressed by governments in a day-to day behavior”, Mr. Cobbett said.

The organization will therefore adapt to include the active participation of its new partners. According to Patricia Holly, Senior Adviser of UN-Habitat, the partnership will leverage the resources of the implicated organizations, providing a common framework to have a real impact in cities. Ms Holly presented the first deliverables of the JWP: the Online Tool Platform and the Local Governments Pocket Guide to resilience, launched “with the purpose to promote the resilience tools, methodologies and strategies available around the world.”

Moreover, she mentioned that the Cities Alliance, together with its partners, is promoting the resilience of informal settlements of 500 cities by 2020. Laurent Widmer, Program Manager Infrastructure Financing of the Swiss State Secretariat for Economic Affairs, shortly commented on the new energy strategy that Switzerland is taking towards promoting resilience in cities. During the Cities/Local Governments Roundtable on inclusive, resilient cities, local leaders made some remarks on the challenges and solutions for building resilience that include vulnerable groups and informal sectors.

“It is not about resilience of the cities, it is about resilience of the people”, Deputy Mayor of Shimla Municipal Cooperation said. Mayor of Tshwane, South Africa, explained some interventions in terms of policy, the government is developing to create resilience in an integrative way. The Bogota Recycling Association described how the recyclers, vital actors in the informal economy, had made a difference providing benefits to their communities, their municipalities and the environment, becoming an example of social and environmental economy initiative in Latin America.

Finally, Gino Van Begin, Secretary General of ICLEI, closed the meeting by welcoming the joint initiative. “This kind of cooperation and the participation of various actors will empower a sustainable urban development. We need development, but we need to deliver differently” he expressed. 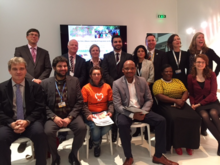