Tam Ky is a provincial city and center of Quang Nam and Central Region in Vietnam. With beautiful nature, wild coastline and diverse ecological area in Song Dam lake, Tam Ky city is making efforts to bring cultural-eco tourism to become a key economic sector. Tam Thanh, as a coastal commune of city, is known for the Ha Thanh beach and tradition sauce facilities. This place has been selected for the art project.
“Cultural tourism is becoming a trend in Korea, and the art is a way to bring great value for it. The art project in Tam Thanh is implemented with objectives of improving people’s living environment, as well as bringing art to community. In addition to share ideas, experiences on art, the project also creates more opportunities for exchange, and strengthens partnership between Vietnam and Korea” said Mr Park Kyoung Chul, representative from Korea Foundation.

UN-Habitat has implemented the project with assistance from partners.

UN-Habitat has implemented project of community-based city development strategy since early 2015. Knowing that Korea Foundation wanted to use the community art to improve living environment and public spaces in Vietnam, UN – Habitat, in association with Korea Foundation and Vietnam Urban Forum, organized workshop on “Community Art for better space” last September, to introduce this remarkable idea for Vietnamese cities. Within the linkage with CDS project of UN-Habitat, Korea Foundation and Tam Ky city have implemented the first “Community Art for better space” project in Vietnam.
“In perspectives of UN-Habitat, people are the center of development. Participation of people and community during city planning and development process will ensure sustainability, equity and social inclusion. We are pleased to know that Tam Ky is the first city in Vietnam to implement this project. It is the evidence of quick-minded and radical leadership of leaders whose will seize the global new trends to apply in their own context. The art village will promote tourism development by attracting community, helping people to live in a real artistic and cultural space, and raising their awareness, responsibility and pride. By this, people is connected and able to reveal their own identity, as a part of creative community art”, said Ms Nguy Huong Ha, UH-Habitat Communications Coordinator.

Mr. Do Dinh Dong, a citizen of Trung Thanh village, Tam Thanh commune said: “After the artists came here from two days ago, the non-living and senseless walls are becoming more soulful and lively. Hopefully, when the project is completed, houses, alleys in Tam Thanh will have a new colour, new look and it surely will bring a whole new vitality and a more modernized atmosphere for this place. We will try to support the artists so they can finish their works, and we will maintain these arts, to bring it as a part of people ‘s lives in Tam Thanh.” 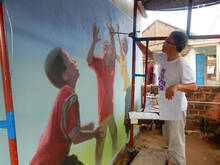 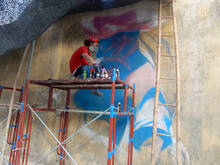