Nay Pyi Taw, Myanmar, November 2018-- – Over 150 participants, ranging from government officials across ministries and from Myanmar’s States and Regions to representatives from academia, private sector, civil society and development partners, gathered in Nay Pyi Taw to celebrate the achievements of Myanmar Climate Change Alliance (MCCA) and discuss next steps.

The MCCA programme has supported the Government of Myanmar to integrate climate change considerations into its reform and development agenda over the last five years. The final dissemination workshop brought together important stakeholders working on the implementation of national policies and programmes against the impact of climate change in the country.

Thanks to the financial contribution of the European Union and the technical and operational support of UN-Habitat and UN Environment, the Government of Myanmar has made great strides over the last five years in developing dedicated governance structures to address the destructive impacts of climate change on Myanmar's economy, and to improve the lives of its people, while planning for a low-carbon future. The MCCA has raised awareness, enhanced understanding and capacity to integrate climate change considerations into sectoral policies and piloted climate adaptation measures at the local level.

The recently released Intergovernmental Panel on Climate Change (IPCC) report on Global Warming of 1.5ºC paints a bleak picture of a future world riddled by climate impacts if drastic actions are not taken to limit global warming to 1.5ºC. Myanmar is especially at risk, having recorded increased incidents of floods, cyclones, and droughts which have caused immense loss of lives and suffering, damage to infrastructure and assets and economic impacts. Climate change is recognised as a key threat to the country’s development, as reflected by the recently adopted Myanmar Sustainable Development Plan (MSDP), where action on climate change is directly incorporated under its fifth goal on natural resources and the environment for national posterity.

At the final dissemination workshop, U Ohn Win, Minister of Natural Resources and Environmental Conservation said: “In effect, the challenges posed by climate change can only be addressed by a partnership of stakeholders, across sectors, institutions, the private and public sector and citizens of Myanmar.”

Dr Johann Hesse, Head of Cooperation, Delegation of the European Union to Myanmar, emphasised: “The European Union is committed to support action against climate change within its borders and across the world. MCCA has contributed to the government's efforts to build a climate resilient and low carbon development pathway for Myanmar. The Myanmar Climate Change Policy and Strategy - when adopted - will offer a strategic answer to the severe impact of climate change in the country and will ensure that socio-economic development goes together with an efficient use of resources.”

Mozaharul Alam, Regional Coordinator, Climate Change Programme, Asia and the Pacific Office of UN Environment, emphasized that the right building blocks for action have been laid in Myanmar in the last years, including the development of policy instruments and identification of finance opportunities for adaptation and mitigation, which sets Myanmar on the right path for taking urgent action on climate change. He reiterated that Myanmar is about to adopt a clear timebound strategy in the form of the Myanmar Climate Change Strategy and Master Plan which has sectoral goals and targets, and which contains key points that ensure resilience is built in a way that leaves no one behind – both vulnerable sectors and societies, solution providers.

Bijay Karmacharya, Country Programme Manager for UN-Habitat, reminded the audience: “Let us not forget that a strong legal and institutional framework on climate change, backed by action on the ground will help us achieve the Sustainable Development Goals to end poverty, build stronger economies and safer, healthier, and more liveable societies everywhere.”

The final dissemination workshop brought together two high-level panels to discuss how sectoral ministries would implement the Myanmar Climate Change Policy (MCCP) and the Myanmar Climate Change Strategy and Master Plan (MCCSMP) 2018-2030 and how partners from academia, private sector, media and civil society can further support implementation of climate change actions across all sectors in Myanmar. 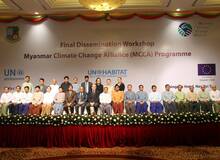