The SDF’s participatory process is an example of how urban planning can be used to coordinate different sectorial concerns to develop an integrated spatial vision. The SDF applies sustainable planning principles on a city-wide scale, and promotes a just and efficient spatial organization. To ensure that the plan is implementable, UN-Habitat’s three pronged approach that incorporates spatial, legal and financial components was adopted from the start.

The framework provides guidelines for development and prioritizes the investments in capital infrastructure and strategic urban areas for the next 25 years. Johannesburg is one of the largest cities in South Africa, and is expected to grow from 4 to 6 million inhabitants by 2040. Currently, most urban growth is accommodated by single-use, low-density areas at the edges of the city, resulting in traffic jams and long travel times to work.

The SDF marks the beginning of a new planning approach that will allow Johannesburg to shift progressively from a sprawled city to a compact one that brings people closer to jobs and amenities and increases public transport opportunities. To achieve this, the SDF defines five transformation areas which include the mining belt, urban development around transit nodes, regeneration and extension of the city centre. Johannesburg’s Spatial Development Framework 2040 sets an example for planning an African city in the 21st century, and how the New Urban Agenda can be implemented. 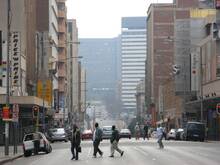