New York 3 July 2015-- The President of the World Assembly of Islamic Cities (WAIC), Mr. Masoud Nosrati, signed a Letter of Intent with UN-Habitat to co-organize a Mayoral Conference on the City Prosperity Initiative (CPI). This conference will be held on July 28th and 29th 2015 at the United Nations Office in Vienna.

Accompanied by a Delegation comprising Mr. Sadegh Najafi Khezerlou, Director of the Board of Atlas of Islamic Cities and Mr. Ali Torkashvand, Director of City data and Standards from WAIC, Mr. Nosrati committed to expanding the use of the CPI among WAIC members cities. The CPI is a tool that enables cities to formulate policies and actions based on evidence to improve the living conditions of their inhabitants.

It also helps to guide targeted investments in key urban priority areas for shared prosperity and sustainability. According to the Letter of Intent, WAIC will provide support to a number of cities to join this global initiative. The Mayoral Conference will be attended by more than 60 mayors across the world that are part of this organization.

The objectives of this Conference are to learn about the CPI scope and opportunities directly from other mayors from Mexico, Colombia and Egypt and other places where this initiative is being implemented. Eduardo Moreno, Head of Research and Capacity Development, expressed UN-Habitat's appreciation to WAIC for their support in organizing this conference and mentioned that this is an excellent opportunity to promote South-South cooperation in best practices associated to this global initiative. 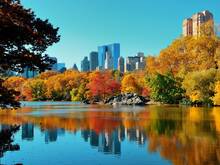