On 28 April 2016, the United Nations Human Settlements Programme (UN-Habitat) organized a ceremony for delivery of a new IDP shelter site in Al-Amal Al-Manshood, Baghdad funded by the Government of Japan. The ceremony took place in the newly developed IDP shelter site delivered by UN-Habitat. The new IDP site was planned and equipped with durable prefabricated shelter units, basic infrastructure and public facilities. The compound will accommodate 100 displaced family who fled their homes in Anbar.

Despite the efforts of the national government and local authorities in providing support to IDPs and returnees, the severe budget crises because of the decline in the oil prices and the cost of the war against ISIL with the influx of displaced persons in Baghdad Governorate, which has received more than 600,000 IDPs by March of this year. The ceremony was presided over by Mr. Ali al-Tamimi the Governor of Baghdad, Head of Abo Ghraib District, Chairman of Provincial Council of anNasir waSalam sub-district, representative of UN-Habitat, heads of Abo Ghraib clans and a group of displace families. The Governor of Baghdad expressed his gratitude to UN-Habitat for their efforts in construction this shelter compound for IDPs which will offer huge support for the displaced persons in this District.

He also called on all UN Agencies to support displaced persons while requesting UN-Habitat to construct an additional 150 shelter units in the same compound. The efforts of security forces in Abo Ghraib District in providing the protection and required facilitation for the compound to be accomplished in an appropriate manner, were also commended by the Governor of Baghdad. Dr. Erfan Ali, Head of UN-Habitat Iraq, asserted the continuation of UN-Habitat to work to alleviate the impact of displacement and support IDPs according to the good practices of UN-Habitat, which are based designing the shelter site according to the IDP families’ requirements, ensuring dignified living conditions and providing basic services. 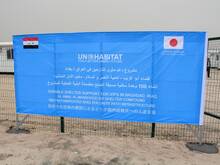