Islamabad, 02 September 2016: The government and its partners are planning the publication of ‘State of Pakistan Cities’ Report’ to address the country’s increasing urban population and insufficient knowledge of the cities’ dynamics, which is resulting in lack of timely service delivery, resource allocation, and urban solutions by cities’ authorities. At a joint press conference in Islamabad on Monday, it was announced that the effort would be spearheaded by the Ministry of Climate Change (MOCC) with technical assistance from UN-Habitat and funded by the Australian Government.

This report aims to present a well-informed analysis of the state of urbanization across Pakistan with quantitative and qualitative city-based data and takes a broader view that incorporates the economic alongside social, demographic, political and cultural aspects. It will support planners, administrators, and decision makers by provision of sufficient information to help them design effective urban solutions without leaving out vital segments of urban society.

“Urbanization is as one of the challenging issues faced by Pakistan. Yet, at the same time it also offers immense opportunities for investments in addition to climate change mitigation and adaptation. Only far-reaching and calculated measures are the means to tackle it and for this purpose, the Government of Pakistan is leading the development of the State of Pakistan Cities’ Report to ensure that vital information can help planners, decision makers and society to produce better and improved urban solutions”, highlighted by Zahid Hamid, the Federal Minister for Climate Change.

Mr. Marvi Memon, Minister for State, commented, “Cities and urban areas are becoming increasingly important for our environment, for economic development and for the security, welfare and quality of life for a growing share of the world's population. I am glad to be a part of this initiative which will surely provide holistic knowledge for sustainable urban planning that is needed to meet both present and future challenges of Pakistan’s growing cities.”

The State of Pakistan Cities Report will provide urban information and updated data on first level major cities of Pakistan, establish appropriate key urban indicators and baselines, analyse development trends and challenges and present potentials for investment and growth. It will build the capacity of relevant stakeholders for evidence-based decision making and monitoring in urban sector.

The report will have an extensive policy impact created at city, provincial, and national levels particularly in relation to urban service delivery, land and housing, role of cities including their potential growth capacities and challenges, and will support the development of National Urban Framework or Guidelines and provincial level urban policies, and investment plans. Australian High Commissioner Margaret Adamson underlined that the Australian Government was pleased to support access to accurate and timely information upon which to base policy and planning decisions.

“The development of the ‘State of Pakistan Cities’ report comes at a time when Pakistan’s cities, and many cities throughout the world, are under increasing pressure from population growth and environmental concerns, including as a result of climate change”, Ms Adamson said. "The report will provide vital data for planners, policy makers and legislators in responding to these challenges and equip Pakistan's cities to play their future role at the centre of the nation's economic and cultural activity."

Neil Buhne, Resident Coordinator, United Nations in Pakistan – spoke about achieving SDG Goals. “When I first arrived in Pakistan in 1990, there were 120 million people, with 33m in urban areas. When I returned 9 months ago, there were 70-80m more Pakistani citizens, and the population in urban areas more than doubled to 80m people, causing paucity in urban services.

Pakistan cannot meet the SDG’s by 2030 if there is not a rapid and big improvement in those services. But it is heartening to see that the government today is taking the lead with all stakeholders involved to provide better urban solutions through well-informed data in the form of State of Pakistan Cities Report 2016. The UN team in Pakistan will complement this by building partnerships, providing technical expertise and assistance, and supporting the implementation of programmes, with UN-Habitat as the UN agency specialising in issues of urban development which will play a crucial role.” 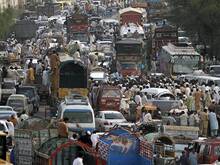