Nairobi 29 April 2015—The 25th session of the Governing Council of UN-Habitat came to a close Thursday night, 24th April 2015, solidifying the agency’s responsibility to lead the New Urban Agenda.

The closing followed days of hard consultation and deliberation. The event saw 780 delegates and 85 UN member countries in attendance while more than 100 partner organisations were represented.

In a statement to mark the occasion, UN-Habitat Executive Director Dr. Joan Clos said “the meeting was the last opportunity to solidify UN-Habitat’s responsibilities in leading the New Urban Agenda before the United Nations Conference on Housing and Sustainable Urban Development – Habitat III – in 2016, as well as the establishment of the post-2015 Sustainable Development Goals and the climate change summit later this year.”

The Executive Director said that with growing numbers living in cities and towns, the importance of well-planned urbanisation crosses over with many of the over-arching development concerns of our present and future – climate change, poverty alleviation and equitable and sustainable development.

“The theme of urban-rural linkages illustrates the critical role of sustainable urbanization in driving sustainable development in all areas of all countries,” the statement said.

Dr. Clos said he was pleased to announce that key resolutions have been passed on UN-Habitat’s work programme and budget and in honing and strengthening its mandate in the run up to Habitat III. “In addition, we are delighted that a key resolution on governance marks a confidence in UN-Habitat’s progress in this area and will strengthen our partnership and our programmes,” he said.

In summary, he said, the commitment to UN-Habitat’s mandate in the field of sustainable urbanisation has been heard loud and clear this week and there has a been strong call for support to enable UN-Habitat to carry out its work in an effective manner, for a successful Habitat III conference and for a better urban future. 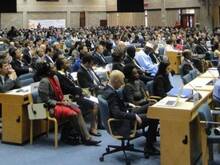