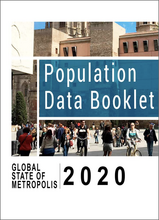 Rising population and uncontrolled urban land consumption rates have been responsible for the rise of bigger and denser cities and metropolises. Definitions of cities, urban agglomerations and metropolitan areas vary depending on legal, administrative, political, economic or cultural criteria in the respective countries and regions. In March 2020, the UN Statistical Commission endorsed a global definition of cities to facilitate international comparison. This definition captures the full extent of a city including the dense areas beyond the municipal boundaries. It defines a metropolitan area as a city and its commuting zone, which consists of suburban, periurban and rural areas economically and socially linked to the city. An approach supported by metropolitan authorities and experts and the World Urbanization Prospects (WUP).

This Data Booklet uses the datasets from the 2018 revision of the World Urbanization Prospects to analyse both global and regional metropolitan trends among the United Nations Regional Groups. This Booklet is in support to the preparation of the forthcoming UN-Habitat Global State of Metropolis Report.

Find out what metropolitan global experts project to happen by 2035!