‘Give Slum Dwellers a Voice’, Secretary-General says in Message for World Habitat Day

Over the past decade, efforts under the Millennium Development Goals have cut the proportion of people living in slums by more than half.  Yet, over the same period, rapid urbanization, especially in the developing world, has seen overall slum populations rise.  In some parts of sub-Saharan Africa, as many as 70 per cent of urban dwellers live in slums and informal settlements.

Slums are often located on the least desirable and appropriate land, such as flood plains and steep hillsides, and are inherently vulnerable to the increasingly severe weather events that climate change is causing.  Many of the people who inhabit slums were pushed to migrate by the lack of opportunities in rural areas or their countries of origin.  They regularly lack basic services such as water, sanitation, electricity and street lighting.  Crime is often endemic, with women and girls particularly at risk.  Unemployment, underemployment and the cost of transport to distant places of work add further hardship.

To achieve sustainable development and a life of dignity for all, we must address these issues.  This year, World Habitat Day is devoted to giving a voice to slum dwellers.  Often, people in the slums live in near-anonymity — no address, no census and no idea when their living conditions will improve.  By learning from their experiences, city planners and policymakers can enhance the well-being of a significant portion of the human family.  Let us hear from people who live in slums what has worked and what has not — and what we need to do.

On this World Habitat Day, I encourage Governments, businesses, academic institutions and non-governmental organizations to give slum dwellers a voice — and to listen to what they have to say.  We have the technology and the know-how to build economically, socially and environmentally sustainable cities based on local solutions.  Ensuring that our towns and cities expand in a well-planned and managed way is not only necessary to meeting the housing needs of our growing urban population, it is also vital for combating climate change, protecting the environment and supporting sustainable development.  Let us focus on a new urban agenda that leaves no one behind.

Read it here in Arabic.

Read it here in Chinese.

Read it here in Russian.

Read it here in French.

Read it here in Spanish. 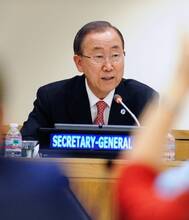