Manila 6 March 2015—On his Philippines tour, French President Francois Hollande’s made a whistle stop visit of Guiuan, meeting local leaders, fishermen and the youth. Guiuan, a second-class municipality at the southern tip of Eastern Samar, facing the Pacific Ocean, was the location of Super Typhoon Haiyan’s first landfall.

All houses in the municipality were razed to the ground in the wake of Haiyan, which also swept through vast municipal waters, including a 60,448-hectare marine reserve. The super typhoon caused USD8.5 million worth of damage in Guiuan’s fisheries sector alone and flattened coconut farms that comprised the municipality’s economy. But given the current climate regime, Haiyan may not be the last extreme weather event from which Guiuan and the rest of the country can suffer. President Hollande was on a two-day visit to the Philippines to push for a global call to action against climate change, in support of the 21st Conference of Parties to the United Nations Framework Convention on Climate Change (COP21) taking place in Paris this December.

Shortly after touching down in Guiuan on 27 February, Hollande had a dialogue with local authorities of the municipal government of Guiuan, led by Mayor Christopher Sheen Gonzales, as well as representatives from civil society and the private sector. After the dialogue, Hollande and Gonzales, with their respective parties, proceeded to the public market and terminal complex where Hollande met with members of the fisherfolk association. Being frontliners in the ecosystem change induced by climate change, Guiuan fisherfolk are being provided partnerships for assistance by the French government.

At the Guiuan East Central School, Hollande gave a public address that highlighted the French government’s solidarity with the Philippines in making sure that efforts being done for the success of COP21 would bring about the safety and resilience of the future generation. “You will set an example for the international community,” Hollande stated in French, addressing the local crowd gathered at the school grounds.

“It is here that you suffered, it is here that you are acting.” “We have…a special duty to do more because we will be holding the climate conference in December. And on this occasion, what I’ve seen here will shed light on what we will be doing in Paris. France wants an agreement to be found with all countries. We want to sign a noble and binding agreement. And when France will mobilize all the countries in the world for the success of that conference, I will remember your faces, I will remember that…you will be watching us, heads of state, and governments. And if we succeed at the end of the conference, I will also remember your faces, see them once again, and remember that we will be acting in the name of the world, in the name of Guiuan, so that nothing like this ever happens again.”

A youth representative from Guiuan, Alexandra Paranas, formally responded, ending her message with an appeal: “Please sign the agreement for us in Paris, France. Please sign it for our future.” Since Haiyan struck, UN-Habitat has been providing technical support in planning to Guiuan with respect to recovery, rehabilitation, reconstruction, climate change adaptation, and sustainable development. A concrete output of this support is the Guiuan Recovery and Rehabilitation Plan (GRRP) which guides efforts of the city and its development partners in rebuilding a resilient Guiuan. 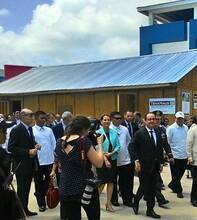 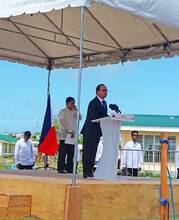