Ramallah, 31 August 2017 –The first State of Palestine Cities Report calls for development of a National Urban Policy and recommends that more effort should be made to improve the planning and governance frameworks, mainstream public participation policies and open up more space for citizens’ participation in decision-making.

UN-Habitat launched the report jointly with the Palestinian Ministry of Local Government (MoLG) and the Municipal and Development Lending Fund (MDLF), which analyses the urban context in Palestine, indicates urbanization trends and forces, and highlights recent debates and initiatives. It reflects the current urban reality with all its spatial, social, economic, and environmental components, and highlights the main obstacles that hinder sustainable development in Palestinian cities.

The report highlights how Palestinian cities are similar to other cities around the world, which are witnessing rapid urbanization, where nearly 75 per cent of the Palestinian population lives in urban areas.

It also sheds light on the impacts of on-going rapid urbanization in Palestine and current geopolitical constrains on the dynamics of the economic development; the patterns of urban development; the provision of urban services and infrastructure; the provision of housing; the urban governance; and the deteriorating state of the urban environment and its potential negative impact on the quality of the living environment.

“In Palestine, whereas we have made progress in advancing our state-building and development agendas, thinking urban in terms of potentials, limitations, and ways in which global and regional urban agendas and urbanization trends are impacting national and local urban development plans, is still a new concept and at best a work in progress”, said Dr. Hussein Al Araj, Minister of Local Government.

“We at UN-Habitat are very proud that we were able to facilitate the production of this highly informative Report, which will hopefully encourage further work on localizing the global urban development agendas, including SDG11 and the New Urban Agenda, in ongoing efforts towards achieving more sustainable and resilient Palestinian cities” said Dr. Zeyad Elshakra, Head of UN-Habitat’s Office in Palestine.

The preparation of the report was made possible by the generous financial support from the Government of the Kingdom of Bahrain, and strong collaboration with the Palestinian Ministry of Local Government and the Municipal Development and Lending Fund. 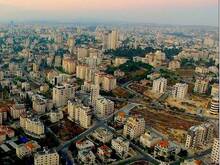