Cairo, 25 June 2015—Egypt last week held its first ever National Urban Forum, which enabled meaningful, public discussion on urbanization challenges and opportunities and by allowing free access to all who registered, provided a rare opportunity for members of the public to directly engage with high level government officials.

The forum was opened by the Minister of Housing, Utilities, and New Urban Communities, Ministry of Urban Renewal and Informal Settlements and was also attended by UN-Habitat Executive Director Dr. Joan Clos. The national event was preceded by a series of sub-national urban consultations. It was attended by over 600 participants from civil society, private sector, government and the general public, from across Egypt, including Cairo, Giza, Upper Egypt, North and South Sinai, Ismailia, Tanta, Alexandria, as well as various international experts.

My City My Responsibility

Notable participants included the Minister of Housing, Utilities and Urban Communities, the Minister of State for Urban Renewal and Informal Settlements, the Minister of Population; Governors of Giza, Cairo, and Qaluobeya, Chairman of the General Organization for Physical Planning and former Special Envoy of the European Union in the Middle-East and Spanish Minister of Foreign Affairs, Mr. Miguel Angel Moratinos.

Titled “My City, My Responsibility” the Forum emphasized that everyone has a role in shaping urbanization and debated many key urban issues that affect the daily lives of Egyptians and their built environment. Under the themes of urban planning and design, urban service delivery, urban economy, housing, and urban legislation and governance, the debate revolved around pertinent questions such as “ What are innovative tools to tackle Cairo’s traffic congestion?” to “What are solutions for the vacant housing units across the country?” “Why do many new urban communities remain unpopulated?” “What are the impacts of gated communities on social equity?”

“How should the challenge of informal settlements be addressed?” “What are alternatives to informal settlements for the urban poor?” and “How can more public spaces be created in already congested cities?” To promote rich, comprehensive and inclusive dialogue, each panel was gender balanced and consisted of a government representative, a civil society representative, a member of the academic community, and a subject matter expert.

Reflecting the opening Statement of UN-Habitat’s Executive Director, that urbanization must be embraced as a positive force for development, that should be planned properly with spatial planning, financing and legislative tools, and responding to the dialogue that took place, the Forum concluded with a Final Declaration that affirmed the commitment of central and local government, civil society and private sector to work together in setting appropriate policies for a sustainable urbanization process across the country.

The declaration also affirmed its intention to advocate the same in the coming Habitat III Conference. “For me, the true success of the EUF was that it created an opportunity for rich and complex dialogue between all relevant stakeholders.

The forum really provided for full participation and engagement of attendees who were able to voice their opinion. This for me is transformational change,” noted Rania Hedeya, UN-Habitat Egypt Programme Manager. Along with co-organisers, the Ministry of Housing, Utilities, and New Urban Communities, the Ministry of Urban Renewal and Informal Settlements and UN-Habitat, she is hopeful that the Egypt Urban Forum will form a sustainable platform for dialogue through replicating the forum every two years. 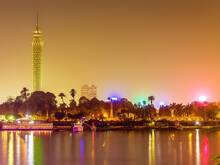