Discussion Paper – December, 2019: Bolivia tomorrow - Reflections on how to operationalize an effective development strategy that sustains a future of well-being for all 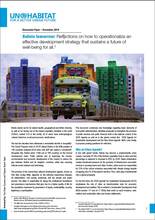 Bolivia1stands out for its natural wealth, geographical and ethnic diversity, as well as for having one of the lowest population densities in the world (10/km², ranked 213 in the world), all of which have anthropological, cultural, historical, social and economic ramifications.

The last two decades have witnessed a remarkable decline in inequality. The Social Progress Index of 20183 places Bolivia in the 80th position of 146 countries analyzed (91st when only GDP per capita is considered). Alongside this, Bolivia ranks 118th out of 189 countries on the Human Development Index. Public policies aim at improving the human, environmental and economic development of the country to reduce the gap between Bolivia and its neighbor countries, while also ensuring internal social cohesion and well-being.