Maputo, 5 November 2015-- The Technical Centre for Disaster Risk Management, Sustainability and Urban Resilience (DiMSUR) held its third Executive Board meeting in Maputo, Mozambique. DiMSUR was launched in 2014 by the Governments of Madagascar, Malawi, Mozambique and the Union of Comoros with the support of the United Nations Human Settlements Programme (UN-Habitat), the European Commission Directorate-General for Humanitarian Aid and Civil Protection (ECHO), the ACP-EU Natural DRR Programme as well as  the Global Facility for Disaster Reduction and Recovery (GFDRR), in cooperation with the United Nations International Strategy for Disaster Reduction (UNISDR).

It was endorsed at Ministerial level by the four member countries as an international non-profitable, autonomous and regional organization. The Centre is non-political in management, staffing and operations with a view to fostering development and dissemination knowledge and solutions as well as developing capacities for disaster risk management, climate change adaptation and urban resilience. UN-Habitat serves as the facilitating secretariat.

In its third gathering, the Executive Board thanked Mr. Bernarde Sande, Principal Secretary of the Department of Disaster Management Affairs, Malawi, for a successful chairmanship over the past year and unanimously elected Mr. Ludovic Lomotsy, Executive Secretary of the National Office for Disaster Risk Management, Madagascar, as his successor.

During the Board Meeting, Mr. Luis Felipe Lopes (UN-Habitat) presented DiMSUR’s flagship product, the City Resilience Action Planning Tool (CityRAP), developed by UN-Habitat and successfully tested in Mozambique and Malawi with participation of Oxfam. The CityRAP tool empowers small and intermediate sized municipalities through participatory instruments and methodologies to understand and plan for urban resilience.

The Executive Director of the Technical Centre, Mr. Ahmed Ouledi, outlined the DiMSUR 10 Year Strategic Plan which includes the Centre’s main priorities and areas of intervention. In addition, Mr. Mr. Alvaro Hoyos (DiMSUR), detailed the strategy for communication, partnerships and resource mobilisation, including the recent launch of the Centre’s website.

DiMSUR is entering into a decisive stage of becoming an independent and autonomous institution thanks to the recruitment of National Focal Points as well as the definition of a solid financial strategy. The latter includes the negotiation of a monetary contribution quota by member countries to which the delegates made a strong commitment. 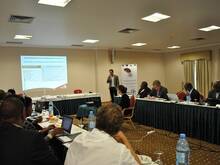