Collaboration between China and UN-Habitat-Under the One Belt One Road Initiative: Executive Director visits Beijing

Beijing– 23 May 2017. The Executive Director of UN-Habitat, Dr. Joan Clos, wrapped up a 2-day official visit to China to attend One Belt One Road Forum (BRF) in Beijing, where Chinese President Xi Jinping invited the foreign heads of the states and governments, and heads of the international organizations to gather into China for exchange ideas and insights of the One Belt One Road cooperation. During the visit, Dr. Clos met several high-level officials and signed three new MOUs, further strengthening the collaboration between UN-Habitat and the China under the One Belt One Road Initiative.

At the same time, Dr. Clos got an interview of the journalist of CCTV and made a speech in the press conference of BRF, indicated that UN-Habitat will support China to collaborate with the countries along B&R initiative.

Dr. Clos and H.E. Mr. Chen Zhenggao, the Minister of Housing and Urban-Rural Development (MoHURD), signed the new Framework of Cooperation (FoC) on the basis of mutual benefits. Mr. Chen Zhenggao assured that China will continue to support UN-Habitat and national implementation of New Urban Agenda. Both sides agreed to strengthen the collaboration through a new FoC.

Dr. Clos signed the MoU with Mr. Yang Baojun, the President of China Academy of Urban Planning and Design (CAUPD). UN-Habitat and CAUPD will collaborate in urban policies and urban planning and design. Dr. Clos gave a keynote speech on the “Implementation the New Urban Agenda”. Dr. Clos stated the crucial issues of New Urban Agenda, explained the urban development and urban planning in the future, and the challenge of urbanization in the post-industrial age. Mr. Yang Baojun, Mr. Wang Kai, the Vice President of CAUPD, Mr. Mao Qizhi, Professor of Tsinghua University and Mr. Shinan, Executive Vice President of Urban Planning Society of China made the high-level dialogue with Dr. Clos for his lecture.

During the visit, Dr. Clos met with Mr. Wang Shengwen, the Director-General, Department of Foreign Assistance, Ministry of Commerce (MoFCOM). This is the first official discussion and opened up the new collaboration between UN-Habitat and MoFCOM. Mr. Wang Shengwen introduced the running of South-South Cooperation Foundation and support UN-Habitat to apply the fund.

Some news report from CCTV (China Central TV) can be found in following links. 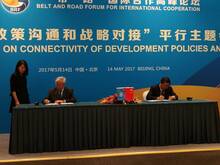 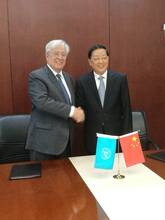