Paris, 8th December 2015. City leaders can become critical actors in addressing the global challenges of climate change. The effects of urbanisation and climate change are converging in very threatening ways: Cities consume 78 per cent of the world’s energy and produce more than 60 per cent of all carbon dioxide and significant amounts of other greenhouse gas emissions. On the other hand, cities are very vulnerable to climate change, with population and infrastructure at risk, especially in costal areas. Cities were therefore in the spotlight on 8th December 2015 at the United Nations Climate Change Conference 2015, COP21, in order to highlight the important role they play in fighting climate change.

The main event of the Lima to Paris Action Agenda (LPAA) brought together key actors from cities, regions, national states, public and private investors and international organizations in order to discuss the transformation at a local and regional scale. The coordination between political stakeholders and different approaches of cities towards climate change were at the core of the debate. “If we don´t cut the emissions now, the costs of adapting to the risk afterwards will be much higher. Nevertheless, we need to improve urban design to protect "our cities against the consequences of climate change, also by providing technical assistance” said UN-Habitat´s Executive Director Dr. Joan Clos in the debate on 'Resilience to Climate Change'.

High quality public space systems as the essential “connective matrix” of lower-emission, more resource-efficient cities were discussed in the event 'Combating The Growth of Sprawl and The Decline of Healthy Public Space Systems', organised by UN-Habitat and the Future of Places Forum. Frederic Saliez, Human Settlements Officer for UN-Habitat stated that “public spaces make compact cities possible - the most powerful city form for a low carbon urban development”. Michael Mehaffy, Chair of the Academic Committee of the Future of Places Forum provided scientific evidence for this: The decline in quantity and quality of public space is a major contributor to higher emissions. This finding has been brought into the Habitat III New Urban Agenda as a key message.

In a high level event on Zero Emission Vehicles, ministers and senior representatives from the vehicles industry, civil society and international organizations called for a swift move to zero emissions vehicles as a key component of a future global climate change strategy. Currently the transport sector is almost completely dependent on fossil fuels and contributes with one quarter to all energy related carbon dioxide emissions. Participants highlighted that, if global warming is to be limited to 2 degrees, at least a fifth of all vehicles on roads by 2030 should be electric.

The same day, the Cities Alliance Joint Work Programme on Urban Resilience was launched. The work programme intends to bring together “expertise and resources across more than 14 organisations to help cities build their resilience to the impacts of Climate Change and other socio-economic stresses" stated William Cobbett, Director of Cities Alliance. During the event, Patricia Holly, Senior Adviser of UN-Habitat, presented two new important tools providing local governments important information to create a more resilience city: A new online resilience tools platform www.resiliencetools.org will be launched this month, as well as a Local Governments Pocket Guide to resilience with the purpose of promoting the resilience tools, methodologies and strategies available around the world. The joint work programme promises to be a success: "This kind of cooperation and the various actors will empower a sustainable urban development" stated Gino Van Begin, Secretary-General of ICLEI ´Local Governments for Sustainability´.

Hosted by Veolia and co-organized by the World Business Council for Sustainable Development (WBCSD), the World Urban Campaign and UN-Habitat, an event titled “The City We Need - Engaging the Private Sector on Cities and Climate Change towards Habitat III” was held during the ongoing COP21 Conference in Paris/France at the Grand Palais. Henry de Cazotte, Special Representative of Habitat III at the French Ministry of Foreign Affairs, opened the meeting by introducing the context of the Habitat III Conference to be a unique opportunity for non-governmental and private sector partners to express their contribution to implementing sustainable development goals and defining a new Urban Agenda.WBCSD, represented by Roland Hunziker as Chair of the General Assembly of Partners Private Sector Constituent highlighted the key role of the business community in urban development and how partners could work through collaborative solutions across sectors.

Business leaders emphasized the importance of an enabling environment for the private sector to produce effective solutions to urban challenges ahead. Governments should be aware that this is essential for the future of business and citizens. Local governments are impatient said Zimmermann, having brought 100 transformative programmes at COP21. A collaboration between business and city leaders is essential to concretise urban projects. However, incentives from National Governments are essential to make this happen. Solutions are to be found in business models at the bottom of the pyramid, social business, new forms of public private partnerships and open innovation systems said business leaders. A new vocabulary and new formulas need to be found to harness the transformative power of urbanization concluded Christine Auclair of UN-Habitat in her closing remarks. This is part of the new urban paradigm that UN-Habitat is supporting with its private sector partners. More than ever, given increasingly urgent resource constraints, cities need urgent attention calling for renewed practices that will result in a drastic optimization of resources and for cities to become active engines of economic development in a new urban era of innovation, prosperity and resilience.

Questions on how the United Nations Conference on Housing and Sustainable Urban Development, Habitat III, can implement some key decisions from COP21 and how the various institutions presented are supporting the ambitious urban climate action was explored in the side event `One UN solutions for cities and climate change: the new climate agreement and the new urban agenda`. Maria Fernanda Espinosa , highlighted the importance of the Habitat III conference for Ecuador and the crucial importance of linking the new urban agenda with the post2015 process and the climate agreement. Ms Espinosa is Ambassador and Permanent Representative of Ecuador to the UN welcomed the audience to Quito, the host of next years Habitat III conference.

Christian Friis Bach, Executive Secretary and Undersecretary General of the United Nations Economic Commission for Europe UNECE, draw attention to the Habitat III Europe Regional Meeting in Prague which will be held in March 2016: “If we succeed in Prague and Quito, we will contribute strongly to the implementation of the Sustainable Development Goals”. The importance of the meeting in Prague was also highlighted by Karla Šlechtová, Minister of Regional Development, Czech Republic. Dr. Clos, Executive director of UN-Habitat and Secretary-General of the Habitat III conference, embraced the linkages between development and urbanisation: “We need to single out what urbanisation contributes to development, instead of only focussing on the problems. The value created by urbanisation needs to be shared. This will be a key element of the new urban agenda.” 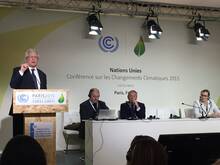