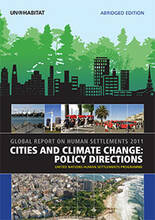 Cities and Climate Change reviews the linkages between urbanization and climate change, two of the greatest challenges currently facing humanity in the 21st Century, and whose effects are converging in dangerous ways. It illustrates the significant contribution of urban areas to climate change while at the same time highlighting the potentially devastating effects of climate change on urban populations. It reviews policy responses, strategies and practices that are emerging in urban areas to mitigate and adapt to climate change, as well as their potential achievements and constraints. In conclusion, the report argues that urban areas have a pivotal role in both climate change mitigation and adaptation and identifies strategies and approaches for strengthening this role.