New York/New Delhi/Nairobi 6 October 2015—World Habitat Day was marked on Monday with calls for sustainable urbanisation across the globe.

In a message during a World Habitat Day High Level Discussion on ‘Public Spaces for All’ In New York, United Nations Secretary General Mr. Ban Ki Moon said the recent adoption of the Sustainable Development Goals (SDGs) reflected an international consensus that sustainable urbanization could play a transformational role.

“This is most clearly reflected in Goal 11 to ‘make cities and human settlements inclusive, safe, resilient and sustainable.’ The 10 targets under Goal 11 address the unfinished business of the MDGs, including the ongoing challenges of slums, housing and basic services. They also incorporate a new constellation of issues such as urban sprawl, segregation, transport, air pollution, resilience to climate change, safety and public space,” he said.

He said the implementation of other SDGs -- including on employment, energy, water and sanitation -- is also essential to sustainable cities. “Indeed, we must recognize the fully integrated nature of the SDGs, and not remain in the silos that the new framework is meant to transcend,” he said.

Mr. Ban was upbeat over the Habitat III slated for next year. “Next year also brings the Habitat III Conference, in Quito in October, which, offers an opportunity to point the way toward solutions to the challenges of rapid urbanization.  The Conference will result in a concise, focused and action oriented outcome document: the New Urban Agenda,” he added.

In his speech, UN-Habitat Executive Director Dr. Joan Clos said that the theme for this year underscored the urgent need for cities to look into the issue of public spaces for the residents.

According to Dr. Clos, the quality of life for people in cities is directly related to the state of its public spaces. Public space provides room for social and cultural interaction and can foster a sense of belonging and pride in an area, he said, adding that a public space that is open to all, regardless of ethnic origin, age or gender, provides a democratic forum for citizens and society.

In her speech, the Deputy executive Director said this year’s World Habitat Day celebrations were taking place taking place at a crucial moment also because the past weekend the world witnessed the adoption of Sustainable Development Goals.

This was an unprecedented step which consolidated our vision of urbanization as a tool, and an engine, for development.

“The vital role of urbanization for sustainable development is reflected strongly in SDG 11, and in no less than other five goals and forty targets. Objective 11 of the Sustainable Development Agenda intends to make cities and human settlements inclusive, safe, resilient and sustainable,” she said.

In Nairobi, an event dubbed ‘Urban Nights’ was held to mark the World Habitat Day. A collaboration effort between UN-Habitat, Slum Film Festival, Urban Bites, Udada festival and the Nairobi City County Government, ‘Urban Nights’ is an idea for an outdoor film screening in the style format of screen on the green.

Speaking at the function, Nairobi Deputy Governor Mr. Jonathan Mueke disclosed that plans were at an advanced stage to end the street families menace by resettling them in a rehabilitation centre on the outskirts of the city.

According to the Deputy Governor, the matter was delicate since it involved human beings and the county government had to move with caution, hence the apparent delay in solving the problem. “We are dealing with lives and families and although most of these people are not from Nairobi County, we must give a human face in looking for solution to this problem,” he said.

In his speech UN-Habitat’s Director of External Relations Thomas Melin hailed the efforts by the Nairobi County to maintain public spaces. Public spaces are very crucial in any city and they must be encouraged,” he said adding that it was time for a paradigm shift in thinking so that public spaces are seen as sources of extra income by city authorities.

Mr. Kenneth Otina from FEMNET challenged the men in the audience to stand for rights of women and to raise their voice against any injustice meted out to women and the vulnerable. On his part Mr. Mordecai Odera from Film Aid told those seeking to work in slum areas to work towards earning the confidence of the residents living there. 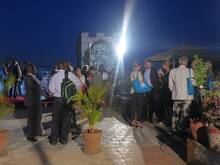 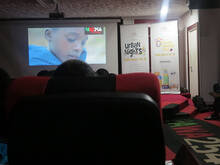 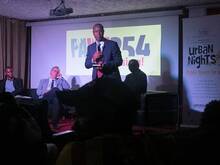