Nairobi, 6 October 2014—Celebrations marking this year’s World Habitat Day took places in various places across the globe with calls for urgent action to address the plight of those living in slums.

In Nairobi, UN-Habitat staff members gathered at the Gigiri Complex for an event marked by a traditional dance, an art exhibition by slum children followed by speeches, including those from the UN Secretary General Mr. Ban Ki-Moon and the UN-Habitat Executive Director Dr. Joan Clos.

The exhibition was mounted in collaboration by a South Korean NGO, ‘Good People’, who work closely with UN-Habitat's youth programme. Titled Voice from Slum (I Have Talent), it saw children from the Kibera slum in Nairobi draw images of their lives and surroundings. In showing pictures representing the children's ideal villages and aspects of slum life, the exhibition highlights the importance and the need to articulate the youth and urbanization agenda.

The United Nations has designated the first Monday of October of every year as World Habitat Day. The purpose of World Habitat Day is to reflect on the state of our towns and cities, and on the basic right of all to adequate shelter. It is also intended to remind the world that we all have the power and the responsibility to shape the future of our cities and towns. Each year, World Habitat Day takes on a new theme chosen by the United Nations based on current issues. This year’s theme is: Voices from Slums.”

In his speech read by Dr. Clos, the Secretary-General said, “to achieve sustainable development and a life of dignity for all, we must address these issues. This year, World Habitat Day is devoted to giving a voice to slum dwellers. Often, people in the slums live in near-anonymity — no address, no census and no idea when their living conditions will improve.

“By learning from their experiences, city planners and policymakers can enhance the well-being of a significant portion of the human family. Let us hear from people who live in slums what has worked and what has not — and what we need to do,” he added.

On his part Dr. Clos said although great strides were being made in checking the rise of slums, rapid urbanisation was adding more strain to such work. “Great efforts are being made to improve many slums around the world and better the lives of those that live there. But slums are a manifestation of rapid unchecked urbanisation – a result of allowing our cities to expand without design or regulation and with disregard to their citizens,” he said, adding that while continuing to upgrade the slums there was an urgent need to focus our efforts on robust urban planning and the provision of safe, affordable housing that is appropriate and adequate for our citizens’ growing needs, including those of the youth.

The Director of Good People Kenya Ms. Grace Lee said: We exist for the poor people living around us, especially those who are suffering from poverty, disease and other disasters. We want to make their situation known throughout the world, so that we can provide the right services, through health care, environmental changes, and quality education.” 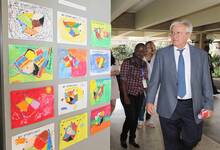