Bonn, 11 November 2017 – A new initiative launched today by UN-Habitat and its partners brings together associations of urban and regional planners from around the world to contribute to the debate and decisions on climate action.

While urban areas account for around two-thirds of the world’s greenhouse gas emissions from global energy use, one of the key communities shaping the way cities grow – planners – have to date been predominantly omitted.

The new initiative, Planners for Climate Action, was launched today at the global climate talks, COP23, being held in Bonn, Germany by Joan Clos, UN Under-Secretary-General and UN-Habitat Executive Director and Said Mouline, Director General of AMEE, the Moroccan Agency for Energy Efficiency.

“Planning is in a bad way,” said Dr Clos during the launch. “Urban planning has dramatically decreased from around 80 per cent [of urban land being planned] before 1900 to less than 50 per cent in 2015.” He went on to emphasize the importance of planning as one of the key tools to make climate positive cities.

A recognised role for cities

Cities’ contribution to total greenhouse gas emissions is estimated at between 37 per cent and 49 per cent globally – a significant portion of total emissions.

At the same time, the global population is expected to be 70 per cent urban by 2050 and the majority of urban growth is taking place in medium and small human settlements.

Despite the significant challenges that they present, it is increasingly evident that well-planned cities can reduce congestion, pollution and provide energy efficiency, leading to reduced emissions.

The Paris Agreement, the Sustainable Development Goals and the New Urban Agenda all acknowledge the role that cities have to play in combating climate change.

Under the Marrakesh Partnership for Global Climate Action, Human Settlements Day at COP23 aims to promote the invaluable role of non-state actors in global action towards curbing and mitigating climate change while also emphasizing the nexus between these two key issues.

Urban and regional planners have a key role to play in reducing greenhouse gas emissions and building climate resilience. Despite this, up to now, planners have not had a comfortable place within existing multi-stakeholder climate initiatives.

Planners for Climate Action aims to combat this by bringing global, regional and national associations of planning professionals and planning educators together to ensure their expertise is incorporated into discussions and action.

Among other activities, Planners for Climate Action will: 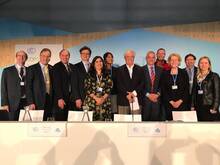 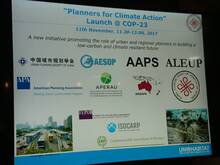