Bangkok 24 February 2015 - The first Resilient Cities Asia-Pacific 2015 was organized on 11-13 February 2015 in Bangkok, bringing together over 300 participants from the region, mainly mayors and local authorities. It was a lead up to the World Conference on Disaster Risk Reduction to be held in Senda, Japan in March.

UN-Habitat was part of the Steering Committee for the Conference and contributed to the four plenary sessions and organized two theme sessions. A plenary Session titled ‘Elements of Urban Resilience in Asia-Pacific’ was facilitated by Dan Lewis, Chief, Urban Risk Reduction at UN-Habitat and he posed the question: "Is a climate resilient city a resilient city?”

It generated some thoughts throughout the Conference. During the theme session, 'Investing to Reduce Urban Risks', the panel discussed how cities themselves are analyzing and addressing their resilience, how going to scale with technical assistance can create opportunities for city governments to access resources (financial and human) and technical know-how; what the UN and donor agencies are doing in support of member states; and finally how global networks can create synergies, share experience, leverage investments, and support their members in achieving greater resilience."We are seeing the boundaries starting to shift here (between mitigation, resilience, and DRR) and I think this is a good thing, and what we are finding is that it's the process that matters, beyond the project" said Cristina Rumbaitis del Rio, Rockefeller Foundation.

During the Theme Session 'Towards Pro-poor Urban Climate Resilience", jointly organized by ESCAP, Rockefeller Foundation and UN-Habitat, the "Quick Guide for Policy Makers: Pro-poor Urban Climate Resilience in Asia and the Pacific" was launched, where the panel discussed the nexus of urbanization, climate change and poverty and shared examples from the cities of addressing risks and social vulnerability and poverty. The Joint publication can be download here.

During the final plenary, the road map to COP 21 Paris, update on Urban SDG and Habitat III regional preparations were presented to link the urban resilient agenda with the upcoming global policy debate. 'A meaningful dialogue amongst climate change communities and DRR communities have emerged with a view to achieving the outcome of 'urban resilient' said Mariko Sato, Chief of UN-Habitat Bangkok in her closing summary session.

The meeting was hosted by the Bangkok Metropolitan Administration (BMA) while ICLEI – Local Governments for Sustainability- is the convener of the Resilient Cities congress series. In his speech, ICLEI Deputy Secretary General Emani Kumar said: "Putting people at the core of every resilience building effort was an overarching theme of the Resilient Cities Asia Pacific congress. The usually forgotten social aspects of planning for urban resilience – collaboration, awareness and capacity building, gender integration and financing programs - were highlighted more prominently in addition to infrastructure development and urban risk assessments.” 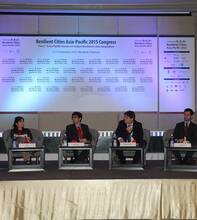 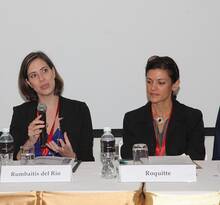