As the World Water Day is celebrated, access to water and sanitation is still a human right

Nairobi, 22 March 2019 - As the World Water Day is marked today, it is worth noting that billions still lack safe water and sanitation facilities. These people are being left behind for reasons related to their gender, ethnicity, culture and/or socioeconomic status, among others. Exclusion, discrimination, entrenched power asymmetries, poverty and material inequalities are among the main obstacles to fulfilling the human rights to water and sanitation and achieving the water-related goals of the 2030 Agenda for Sustainable Development.

According to the United Nations World Water Development Report 2019: Leaving No One Behind launched on March 19 as part of the World Water Day celebrations, a significant proportion of unserved and under-served urban residents in vulnerable situations are not counted (‘below the radar’) in current methods used for estimating service coverage. Chapter six of the report is on Cities, urbanization and informal settlements. It indicates that some of the problems lie in the ‘informal status’ of certain urban settings, and their consequent exclusion from ‘official’ statistics. Other problems result from survey methodologies that do not include inequities in service provision.

As poor and vulnerable groups are not homogeneous, policies regarding water supply and sanitation need to distinguish between different populations and design specific actions to address each of them. Disaggregated data with respect to gender, age, income groups, ethnicity, culture, geography and social inclusion analyses are key tools in determining which groups are at greatest risk of being ‘left behind’, and why. When resources are limited, it makes sense to target areas where populations have the least access to services.

In a statement to mark the day, UN-Habitat Executive Director Ms. Maimunah Shariff said, “nearly all net population growth is taking place in cities and the world is becoming increasingly urbanized. Sustainable development challenges will therefore be increasingly acute in cities, particularly in the lower- and middle-income countries where population growth and the pace of urbanization are greatest. Water scarcity is a constraint to universal basic service delivery and sustainable development. Overall, the number of urban dwellers worldwide living with seasonal water shortages is forecast to grow from close to 500 million people in 2000 to 1.9 billion in 2050. The situation is worse in informal settlements where basic water and sanitation needs are barely met. Residents are often not recognized as part of the formal system, and most importantly “left behind” in terms of access to water and sanitation services”.

On 28 July 2010, the United Nations General Assembly adopted a historical resolution recognizing “the right to safe and clean drinking water and sanitation as a human right is essential for the full enjoyment of life and all human rights” International human rights law obliges state to work towards achieving universal access to water and sanitation for all, without discrimination, while prioritizing those most in need.

Fulfilment of the human rights to water and sanitation requires that the services be available, physically accessible, equitably affordable, safe and culturally acceptable.

‘Leaving no one behind’ is at the heart of the commitment of the 2030 Agenda for Sustainable Development, which aims to allow all people in all countries to benefit from socioeconomic development and to achieve the full realization of human rights. 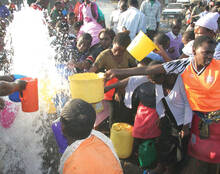