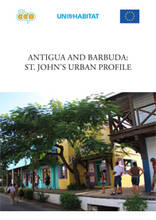 St. John’s, situated in Antigua, is the capital of the three-island nation of Antigua, Barbuda and Redonda. St. John’s City has a population of about 25,000 - 32% of the country’s total population. The next largest urban area in the country, All Saints Village, has a population of about 4,000; St. John’s is therefore a primate city. A primate city is defined as being “at least twice as large as the next largest city and more than twice as significant” [Mark Jefferson in 1939].

A primate city is number one in its country in most aspects, like politics, economy, media, culture, and education. St. John’s, at the head of a deeply indented harbour, is not only the residential capital of the country, but the commercial, entertainment and administrative centre as well. Tourism is important, and the harbour has been dredged to accommodate deep-draft (35 feet) cargo and cruise vessels. Because of the city’s British colonial past, it is blessed with a number of historic buildings and heritage sites which are important for heritage tourism, especially in light of the fact that most tourist cruise ships that visit the country dock in St. John’s Harbour and the tourists disembark directly into downtown St. John’s.