Shanghai – 23 July 2016. The Executive Director of UN-Habitat, Dr. Joan Clos, wrapped up a 3-day official visit to China, where he met several high-level officials and signed new agreements, further strengthening the collaboration between UN-Habitat and the Chinese government. Dr. Clos was in China upon invitation of Ministry of Housing and Urban-Rural Development of China.

Dr. Joan Clos updated the Chinese counterparts on the forthcoming Third session of the Preparatory Committee for Habitat III in Indonesia and on the Habitat III Conference itself, which will take place in Quito, Ecuador in October.

In the meeting with H.E. Chen Zhenggao, the Minister of Housing and Urban-Rural Development, Dr. Clos complemented the achievements of China with regard to planned urbanization, which has generated many experiences that are valuable for other developing countries.

Mr. Chen assured that China will continue to support UN-Habitat and the preparations for Habitat III. Both sides agreed to strengthen the framework of cooperation through a new MOU, as the current agreement is up for renewal at the end of 2016.

Dr. Clos met with Hu Zucai, the Deputy Chairman of National Development and Reform Commission, which is an important government institution responsible for urbanization policies and economic development of the country. Both agreed to strengthen the cooperation through high level consultations and by setting up pilot projects. In the presence of the Deputy Chairman, Dr. Clos and Li Tie, the latter on behalf of the China Center for Urban Development signed a new Memorandum of Understanding, or MoU.

Dr. Clos also met Luky Eko Wuryanto, Vice President of Asia Infrastructure Investment Bank (AIIB). Mr. Wuryanto introduced the development of the AIIB. Mr. Wuryanto welcomed UN-Habitat’s support with technical advice to the bank and its projects, particularly in project preparation and capacity building for urban infrastructure, including slum upgrading. Both agreed to have further discussions to establish a framework of cooperation.

In the China Academy of Urban Planning and Design (CAUPD), Dr. Clos gave a lecture on urbanization in the world and the New Urban Agenda. Wang Kai, the Vice President of CAUPD, introduced recent updates to the urbanization policies in China, and Mr. Zhang Bing, the Chief Planner of CAUPD introduced the work of CAUPD. The Chinese experts expressed strong support for the principles of New Urban Agenda.

Also during the visit, Yoshinobu Fukasawa, the Director of UN-Habitat Regional Office for Asia and Pacific signed an MoU with Mr. Chen Wei, the Director of Wuhan Land Use and Urban Spatial Research Center in Beijing in the presence of Dr. Clos, to provide the City of Wuhan with technical support in their urban planning.

Dr. Clos also visited Shanghai and met Mr. Yangxiong, the Mayor of Shanghai. He expressed strong appreciation for Shanghai’s kind support for the World Cities Day celebration, both internationally and in China. The Mayor agreed to broaden the cooperation with UN-Habitat. For this purpose, UN-Habitat, the Shanghai Municipal Government and Tongji University signed a MoU for an Education & Training Cooperation Programme on Sustainable Urban Development.

Dr. Clos and Jiang Zhuoqing, the Vice Mayor of Shanghai, also attended a International Revision Committee Meeting in Shanghai for the “Shanghai Manual”. This manual presents a wide range of good practices on urbanization worldwide and will be launched in Quito, Ecuador in October, 2016, at Habitat III. 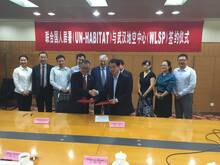 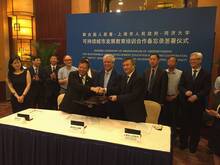