Women's Safety Audit: What Works and Where? 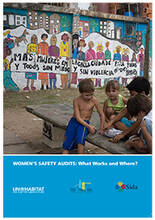 In many cities women and girls face violence not only in their homes and in relationships, but also in public spaces due to poor urban design and poor management of public spaces. Whether it is due to threats, intimidation, harassment, sexual attacks or rape, all aggression seriously inhibits women from moving around the city because they feel unsafe. Women and girls are often targets of violence due to their vulnerability, and this vulnerability perpetuates their position in society.

One of the ways in which women can feel safer and fully benefit from the services and resources cities can offer is to actively seek changes in their physical environment by working together with municipal authorities and other community institutions and groups. The Women's Safety Audit is a tool that enables a critical evaluation of the urban environment.

The Women's Safety Audit tool was first developed in Canada following the recommendations of the 1989 report on violence against women and has further been developed by UN-HABITAT in the cities of Cape Town, Johannesburg, Durban, Dar es Salaam, Abidjan, Nairobi and Warsaw.