The Vice-President and the Minister for Home Affairs of the Republic of Kenya, His Excellency Kalonzo Musyoka; the Commissioner of Prisons, Isaiah S.M. Osugo; Robert Goodwin, Chief of UN-HABITAT Lake Victoria Programme; and S.M.F. Karioki, Chairman of Global Victims Support Programme, have inaugurated a new water and sanitation facility for the staff and inmates of Kisii Prison.

The project is part of the UN-HABITAT Lake Victoria Programme and the Prisoners Care Programme (PCP) leaded by the Global Victims Support Programme. The objectives are to provide a sustainable supply of clean water for prisoners and detainees, to improve hygiene and sanitation systems at prisons and detention centers, and to ensure prisoners their basic human rights.

The project, which started in 2009, has been implemented in Kisii prison and is being also developed in Homa Bay prison. The two projects will improve the daily lives of around 7,000 people, prison staff and inmates and the total UN-HABITAT funding is US$167,000 in addition to the technical support for the implementation of the projects.

The first phase of the project involved provision of clean sustainable water, construction of storage facilities, distribution of water to users (prisoners and staff) and rehabilitation of the sewer and sanitation system. The second phase will be two bio-gas facilities to provide cooking gas from waste in the Kisii and Homa Bay prisons.

During his visit, Vice-President Musyoka thanked UN-HABITAT and the Prisoners Care Programme for his collaboration with the Kenyan Government to improve basic services in Kenyan prisons.

Mr. Goodwin stressed that "Water and sanitation is at the forefront of UN-HABITAT's agenda to improve the lives of poor and vulnerable people in the expanding urban and peri-urban settlements of the developing world".

"We continue to note, with concern, that water and sanitation development programmes too often focus on large infrastructure works which often fail to deliver improvements where they are needed most, namely for the poor living in slums, women-headed households, the elderly and disabled, as well as people living, working and studying in institutions such as schools, health centers, orphanages and prisons", he added.

Mr. Karioki, from the Prisoners Care Programme, pointed out that "access to safe, palatable water in our prison system is not merely a basic human need, but a human right. Regardless of language or culture, all human beings, even prisoners, share the same basic needs essential for survival, food, shelter, water".

UN-HABITAT has two major water and sanitation projects in Kenya: firstly, the Water for African Cities Programme, which targets large cities such as Nairobi and Kisumu. Secondly, the Lake Victoria Region Water and Sanitation Programme which targets small towns such as Kisii, Homa Bay and Bondo. These three Kenyan towns have already benefited from investments in water, sanitation and solid waste improvements and related training and capacity development. Over the past 4 years, UN-HABITAT has provided over US$ six million in support for water, sanitation and solid waste management improvements in these three towns and it has also assisted in training and capacity building for more than 1,000 people in areas such as water management, improving the delivery of basic services, municipal governance and local economic development.

The project is being extended to another 15 towns in 5 countries, including the Kenyan towns of Kericho, Keroka and Isebania, with the support of the African Development Bank, with a budget of around US$120 million, as the second phase of the Lake Victoria Region Water and Sanitation Initiative.A video clip of the inauguration is available here 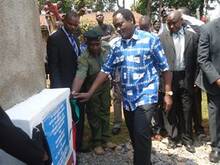