Urban Thinkers Campus: Towards a Participatory and Inclusive Habitat III

Caserta, Italy, 17 October 2014; This week, UN-Habitat convened the first Urban Thinkers Campus: an innovative, inclusive, and intimate gathering of a diverse array of urban thinkers convened as the next step in The City We Need process towards building partner consensus at Habitat III.

The Campus made space for the voices of any and all participants, opening space for debate, learning, consensus building, and drafting. It was a step towards calling for wider participation and contributions in The City We Need process. Through this Campus, the City We Need process has undergone the first step in gaining a representative and inclusive review process.

Throughout the Urban thinkers Campus, key representatives gathered every morning in their constituent groups in order to develop consensus on the issues, concerns, inputs, and position of their constituent group to The City We Need. On the final day, constituent groups were asked to draft the next version of detailed text of the City We Need, from the perspective of the constituent group. This was then brought to the Closing Ceremony, where all positions were announced. These are available (in preliminary, draft form) online here. The participants will further elaborate on their positions, and send the finalized text by 15 November. The updated version will also be added to the UN-Habitat website at that time.

In addition, the co-chairs and rapporteurs from each constituent group came together in a joint drafting session, where they agreed on the key principles of The City We Need. It was agreed that they will later proceed to elaborate on the fine details and text of the document.

The following are the key principles agreed upon in the meeting of all constituent groups:

The following were not yet agreed, but were proposed and tabled for further discussion by the constituent representatives:

After all constituents had presented their positions, the representatives of each group officially handed the documents to Ms. Ana Moreno, the Coordinator of the Habitat III Secretariat, who accepted them on behalf of the Secretary General of the Habitat III Conference, Dr. Joan Clos. The handover ceremony encompassed the spirit of inclusivity, friendship, and cooperation that defined the Campus.

Find out more on the Urban Thinkers Campus here 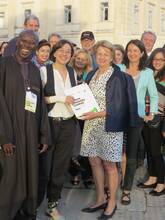 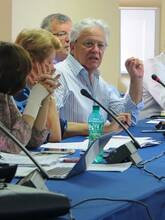