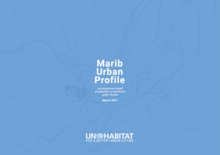 UN-Habitat seeks to provide up to date, holistic documentation and analysis of the impact of the crisis in key cities, through City Profiles, synthesising information and insight from existing sources and priority sectors, supplemented by direct field research by UN-Habitat teams based in each city. This profile is part of a regional urban profiling exercise that aims to develop urban profiles for the cities of Basra, Sinjar (Iraq), Derna (Libya), Mareb (Yemen) and Dara’a (Syria). UN- Habitat’s expertise in urban analysis, community approaches and crisis contexts have informed the development of the City Profiling process. All City Profiles are developed in close association with the concerned governorates and municipalities.

The structure of the City Profile provides a pre-crisis baseline and data from the current situation to understand the impact of the crisis accompanied by narrative description and analysis. Furthermore, City Profiles review the functionality of the city economy and services, understanding of capacities and coping mechanisms and the identification of humanitarian or development priorities. They do not provide comprehensive data on individual topics, but seek to provide a balanced overview. The City Profile affords an opportunity for a range of stakeholders to represent their diagnosis of the situation in their city, provides a basis for local discussions on actions to be taken and helps to make local information and voices accessible to external stakeholders seeking to assist in development response.

The report “Marib Urban Profile” - developed over the course of one year and the fifth in a series of urban profiles developed by UN-Habitat in the Arab States Region - examines how in the past five years, Marib have ushered in Marib’s transformation into one of the fastest growing cities in the Arab Region and catapulted from the periphery to the very core of Yemen’s political, economic and security dynamics. It explores how a major component of Marib’s success has been no just its oil wealth, but also the distributed, decentralised nature of leadership mechanisms used by the tribes of Marib, which have enabled the city to maintain a degree of autonomy.

The recent armed conflict around Marib city redoubled the threats of a mass second displacement wave and another, more dire humanitarian crisis: “The IDP population in Marib has nowhere else to go. More than one million IDPs hosted in Marib governorate, mostly originated from northern areas, and life threatening and  protection concerns will likely instigate a mass displacement from Marib further into the eastern provinces,” says UN-Habitat Head of Country Programme.

Now under the recent armed conflict, Marib needs to be maintained as a safe haven for the IDPs and a centre for exploring how a decentralized future of the republic would look like. To this end, engagement and support on policy decisions to improve its urban governance, service provision, and quality of life should be prepared to follow any humanitarian assistance programme. UN-Habitat is grateful for the support of Marib Governorate for their facilitation of the research and the important contributions towards the “Marib Urban Profile”.

Learn more about our work