Urbanization is one of the most significant trends of the 21st Century with the global urban population growing from 732 million in 1950 to 4 billion in 2017. This number is expected to nearly double by 2050. The rapid growth of urban areas has increased economic productivity and provided greater opportunities and better quality of life for many. Cities create wealth, generate employment and drive human progress by harnessing the forces of agglomeration and industrialization as well as offering greater societal freedoms. However, despite these achievements, urbanization has also been associated with several negative effects including generation of multiple forms of inequality, exclusion and deprivation. Many cities have struggled to integrate migrants and refugees while women, the elderly, the youth, persons with disabilities, indigenous peoples and internally displaced persons continue to face marginalization. 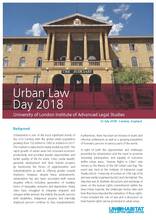