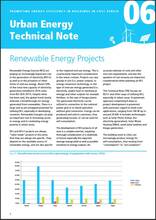 Renewable Energy Sources (RES) are playing an increasingly important role in the generation of electricity (RES-E) as well as in the provision of other forms of end-use energy. About 50% of the total new capacity of electricity generation installed in 2010 came from RES (IEA 2011). Despite what has been said, the global trend clearly indicates a breakthrough for energy generated from renewables. There is a large and as yet untapped potential for utilising RES, especially in developing countries. Renewable Energies can play an important role in increasing access to energy and in combating energy poverty in urban areas.