Rio de Janeiro, 11 December 2014 – UN-Habitat and the City of São Paulo have entered an agreement to promote debate around the challenges to sustainable urban development. The Mayor of São Paulo, Fernando Haddad, and the Director of the UN-Habitat Regional Office for Latin America and the Caribbean, Elkin Velásquez, signed a Memorandum of Understanding to firm up the existing partnership between the two institutions.

The partnership will promote discussions on the design and implementation of participatory and transparent solutions focused on mobility, urban transport, housing, environment and urban development, poverty, social inequality and metropolitan governance. Also it will foster research on the implementation, monitoring and evaluation of experiences, activities and projects that deal with urban management.

Speaking at the signing, Mr Velasquez said: "São Paulo is a city of reference for all of Latin America. I think a very important progressive position here is being developed. Making a plan is important, but to materialize the plan is even more so.” Mr Velásquez highlighted that to achieve sustainable urban development public policy should be participatory, involving the population in urban policy development. "We need to show how small decisions have structural and long-term impacts. For example, urban management actions can respond to dilemmas such as jobs, security and inequity," he said. In this way, the agreement also provides for the systematization and dissemination of good practice in related topics of both institutions.

Finally, the memorandum launches technical cooperation from UN-Habitat to prepare the city for the Third Conference of the United Nations on Housing and Sustainable Urban Development (Habitat III). "In 2016 we will have the Habitat III conference where a number of issues around the sustainable urban development will be discussed. The close proximity [between City Hall and UN-Habitat], will facilitate the monitoring of what is being done here [in regard to urban development], said , Leonardo Barchini, Municipal Secretary of International and Federative Relations for Brazil. 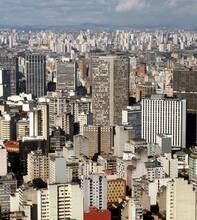