Cairo, 29 August 2017 – UN-Habitat in cooperation with Megawra (The Built Environment Collective-BEC) and Cairo governorate (Cairo Heritage Preservation General Administration) organized the first Minecraft workshop in Egypt for the participatory design of an open space in Al-Khalifa neighborhood in Cairo.

Al-Khalifa neighborhood in the heritage site of Islamic Cairo is one of Egypt’s most unique areas, with estimated population of 20,085 in an area of 25,3284 m2; it’s considered one of Cairo’s most dense areas, suffering from lack of public spaces and access to basic services particularly to women and children.

Under the framework of UN-Habitat Regional Public Space Programme, and serving SDG11 and its target “By 2030, provide universal access to safe, inclusive and accessible, green and public spaces, in particular for women and children, older persons and persons with disabilities” UN-Habitat is partnering with Megawra and Cairo governorate to rehabilitate an open space of 3000 m2, on two phases, in Al-Khalifa. An area which is currently used as a garbage dump and a hub for illicit activities will be converted into a heritage and environment park for the use of the residents of the neighbourhood.

The Khalifa project, receiving a grant of 100,000$ form the global public space programme and with the guidance of UN-Habitat’s videogame expert Eugenio Gastelum, is pioneering the use of the popular Minecraft video game for the first time in Egypt as a tool to engage the community in the design process of public spaces. Around 20 community members, mainly adolescents from both genders, participated in a 3 day design workshop. “This is the first Minecraft workshop to be held in Egypt” says Safa Ashoub, Public space expert at UN-Habitat regional office for Arab states, “We are hoping to build the capacities of adolescents to be able to understand and design their public spaces and to later on utilise this useful tool for their own development” She added.

The workshop started with an introduction to the principles of public space design, a discussion on the importance of community engagement, and what residents from Khalifa like and dislike about their area. Afterwards, participants were divided into teams and built their visions of the public space utilising Minecraft. “Now we can have a nice landscape and a green area close to where we live, I love how we can put our ideas into the game and see it come to reality” says Ziad a 12 year old participant of the workshop.

“During the workshop, it was interesting to see the progress of the ideas produced by participants, on the first day they were interested to explore all the features of the game, later on they started coming up with more concrete ideas about what they want in their area, by the end of the workshop they were able to reflect the principles of good public space they learned in their designs by including items like: street lightings, pavements and community centers.” added Safa.

On the last day of the workshop, participants presented their designs; ideas presented by participants were noted and prioritized, afterwards a final model that combines the agreed upon ideas will be developed and will be part of the design phase of the final public space.

“Today I discovered I have a passion for design, when I grow up I want to be an architect to design nice spaces in my neighbourhood, Minecraft is even better because I can make my design alive and as colourful as I want!” says Nancy.

The Khalifa project is part of UN-Habitat’s global public space programme and is divided into 2 phases; the first phase of the project is expected to be implemented within a year from receiving the grant. 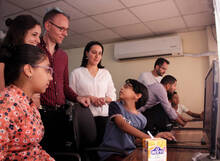