Colombo, 15 September 2014: UN-Habitat, in partnership with the Municipal Council of Akkaraipattu, Urban Councils of Vavuniya and Mannar and the Pradeshiya Sabha of Maritimepattu (Mullaitivu), officially launched the Disaster Risk Reduction and Preparedness Plan for each City at the Water’s Edge in Battaramulla on Monday. These Plans have been developed with funding from the Government of Australia.

Also present were by UN-Habitat officials and the representatives of the Municipal Council of Akkaraipattu, Urban Councils of Mannar and Vavuniya and the Pradeshiya Sabha of Maritimepattu.

Speaking at the launch, Ms. Koppe said “Australia understands the devastating impact that natural disasters can cause. We recognise that every dollar invested in preparation and planning can save a dollar and possibly much more in emergency response, rebuilding and recovery, as well as saving lives and protecting human health.”

The Project is implemented by UN-Habitat and runs from March 2013 to September 2014, with the main aim of establishing sustainable, disaster resilient and healthy cities and townships in conflict affected, disaster prone cities in Sri Lanka’s North and East. It has been implemented in close collaboration with the University of Moratuwa, Urban Development Authority, Disaster Management Centre, Department of Irrigation and the Local Authorities and communities of the four cities.

Funding totalling US$ 2.1 Million has been provided by the Government of Australia for this Project and its predecessor which focussed on the cities of Ratnapura, Balangoda, Kalmunai and Batticaloa.

With the end of three decades of conflict, the North and East of Sri Lanka is undergoing rapid economic development, especially in terms of infrastructure and housing. The Northern and Eastern Provinces are also highly vulnerable to natural disasters, particularly cyclones, floods and storm surges.

The Plans, which were prepared in close collaboration with all stakeholders, identify disaster risk reduction strategies for each city. These DRR plans are incorporated into the Urban Development Authority Development Plans, which are gazetted by the Urban Development Authority and then become legal instruments for each Local Authority. In addition to the Plans, the project is implementing Disaster Mitigation Pilot Projects in each city and DRR awareness programmes for community members, Local Authority Officers and schoolchildren. 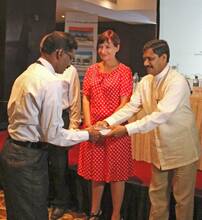