The UN-Habitat Executive Office in Moscow was established in 1989 in accordance with the Memorandum of Understanding between the United Nations Center for Human Settlements (UN-Habitat) and the USSR State Committee for Architecture and Urban Planning.

Thus, the history of cooperation of the Russian Federation with the structures dealing with housing policy and sustainable urban development in the UN system is deeply rooted in the era of the Soviet Union, when it played a prominent role in this global international organization and made a significant contribution to the formation of its budget.

In accordance with Resolution of the Government of the Russian Federation No. 323 of June 3, 2003 “On Approving the Interdepartmental Distribution of Responsibilities for Ensuring Russia’s Participation in International Organizations of the UN System”, until 2004 the State Committee of the Russian Federation for Housing, Construction and Utilities (Gosstroy) was the principal agency for cooperation between Russian organizations and UN-Habitat.

The basic principles of cooperation aimed at the achievement of sustainable development of human settlements and implementation of the Habitat Agenda as well as achievement of the relevant development goals of the Declaration on Cities and Other Human Settlements in the New Millennium were incorporated in the Agreement on Cooperation concluded by the Parties on April 11, 2006. The Agreement envisaged joint work in the following areas:

The UN-Habitat Project Office was established in Moscow in April 2009. The Commission on Cooperation between UN-Habitat and the CIS Inter Governmental Council for Cooperation in Construction Activities also began its work in 2009.

In January 2010 the UN-Habitat Moscow Office signed a Letter of Agreement with the Committee on Housing and Land Management of the United Nations Economic Commission for Europe, taking upon itself responsibility to assist UNECE in providing informational support and other activities.

In 2012 UN-Habitat signed Memorandum of Understanding with the CIS Inter-Governmental Council for Cooperation in Construction Activities and will continue to work jointly with Russian Government and other Governments of the countries of the region through its Moscow Office on implementing the New Urban Agenda and improving the quality of life in cities.

In 2014 the Methodology Center of the UN-Habitat Moscow Office was established in Minsk (Belarus) to assist the CIS countries in preparing national reports and to draft a Regional report for the UN Conference on Housing and Sustainable Urban Development (Habitat III).

In 2014-17 the UNDA 9th Tranche Project “Strengthening national capacities for sustainable housing in selected countries with economies in transition” was implemented in Armenia, Moldova, and Tajikistan in cooperation with the UNECE Committee on Housing and Land Management.

The International Conference on “Public space as a place for dialogue: Promoting the implementation of the New Urban Agenda in Russia and the CIS Region” which was held in Russia in the city of Saint Petersburg on June 1-3, 2017 highlighted the importance of public space for wellbeing in cities. It was organized jointly by the Ministry of Construction, Housing and Utilities of the Russian Federation, UN-Habitat, the Municipal Government of Saint Petersburg and the ITMO University and has provided insights on urbanization trends in Russia and other countries of the Region.

Representatives of the UN-Habitat Secretariat and Head of the UN-Habitat Moscow Office joined the Expert Council on Urban Environment established under the Ministry of Construction, Housing and Utilities of the Russian Federation in 2017.

In 2018, the UN-Habitat Moscow Office joined the Ministry of Construction Working Group on Smart Cities

In 2018 in recognition of the scope of the activities of the UN-Habitat Moscow Office it was renamed into the "Project Coordination Office for Countries of the Commonwealth of Independent States (CIS)". 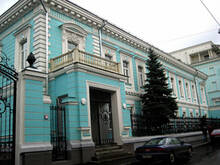