Hawassa, Ethiopia April 15, 2021- UN-Habitat and the city administration of Hawassa have jointly launched the Hawassa City Structure Plan. Through the Support to the Sustainable Development of the Hawassa City Cluster project, UN-Habitat has provided technical support for revision of the Integrated Development Plan (IDP) for Hawassa.

“The revision of this plan begun in 2017 to address the complex spatial relationship between giant projects such as industrial parks within the city and surrounding settlements. This revised Hawassa city structure plan will systematically control and guide the city’s development for the next ten years, said Haregewoin Bekele, Country Manager, UN-HABITAT. 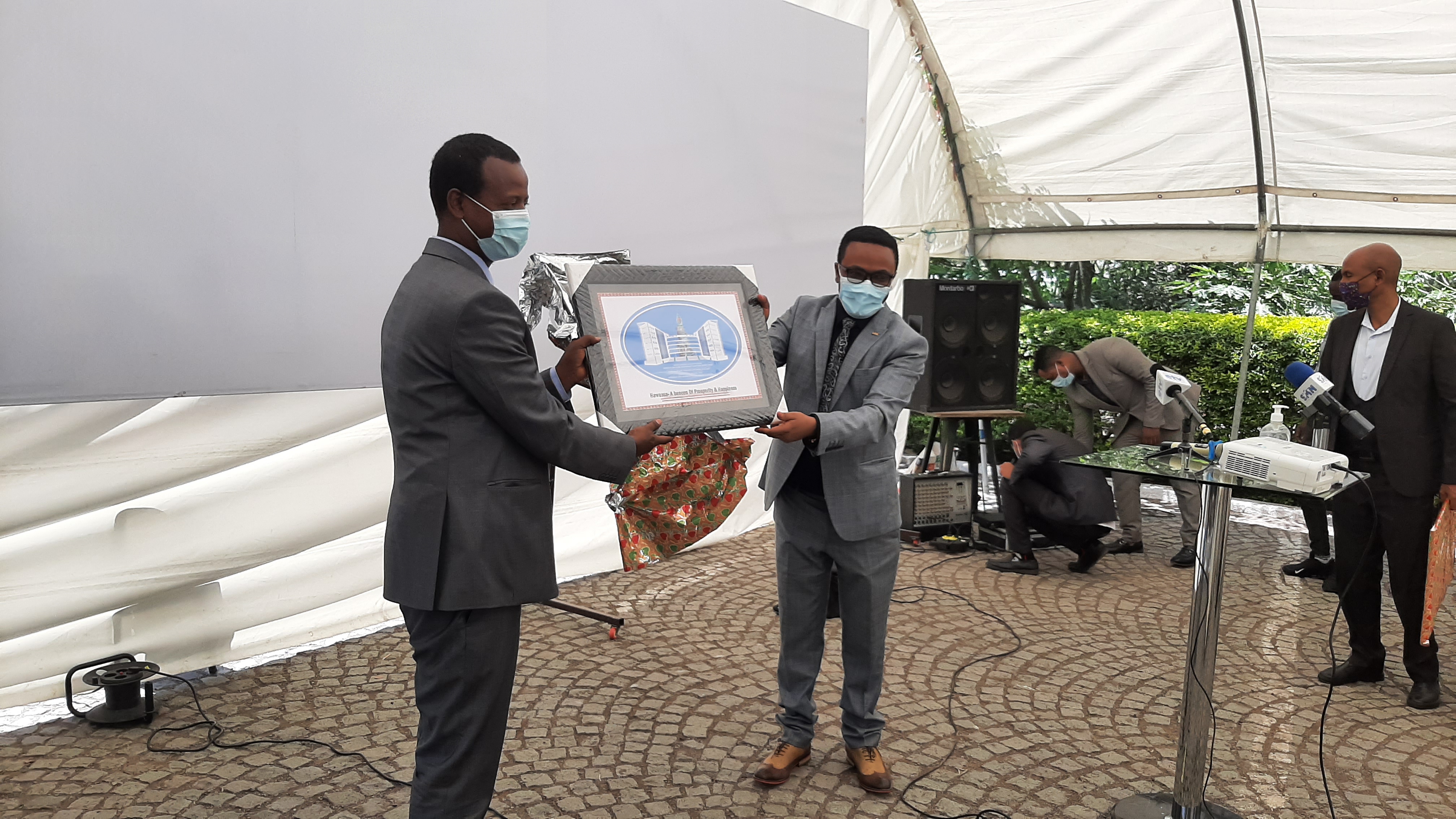 The Mayor of Hawassa, Tsegaye Tuke, hands over a plaque with the emblem of the city of Hawassa to Dr. Belay File of UN Habitat as an appreciation for the partnership towards the revision of the Hawassa City Structure Plan.
[UN-Habitat/Abel Estifanos]

The Deputy Mayor of Hawassa City, Tsegaye Tuke noted that the city’s planning team has been trying to revise its plan for the last 10 years. Their efforts have been complemented by technical support from UN-Habitat, funded by the British Embassy, and they have all worked closely with the Ministry of Urban Development and Construction. “The newly revised structure plan will solve challenges associated with plan implementation and development priorities for the next ten years,” he said, thanking the government of the United Kingdom for its financial support, and UN-HABITAT for technical support with revision of the plan, working closely with the city government.

“We are confident that the implementation of this plan will help Hawassa City realize its potential as an attractive, sustainable destination for private investors that will bring prosperity to the community and wider region over the years to come,” remarked a representative of the British Embassy, John-Paul Fanning.

The Embassy of Japan, the City Government of Hawassa, and UN-HABITAT have jointly launched the Emergency Technical Support to Solid Waste Management (SMW) project in Hawassa, Ethiopia. The city has been operating its dumpsite since 2010 and will be the third city in Ethiopia to apply the Fukuoka Method of landfill management to rehabilitate and stabilize the existing open dumpsite.

Speaking at the launch, the Mayor of Hawassa, Tsegaye Tuke, said Hawassa as one of the fastest growing cities in Ethiopia, and it is faced with challenges in managing its municipal solid waste. The city has one solid waste dumpsite that covers an area of 3.8 hectares. The dumpsite has exceeded its volumetric capacity. Leachate and landfill gas collection systems are absent, which puts the dumpsite at risk of flooding, subsidence, and landslides. 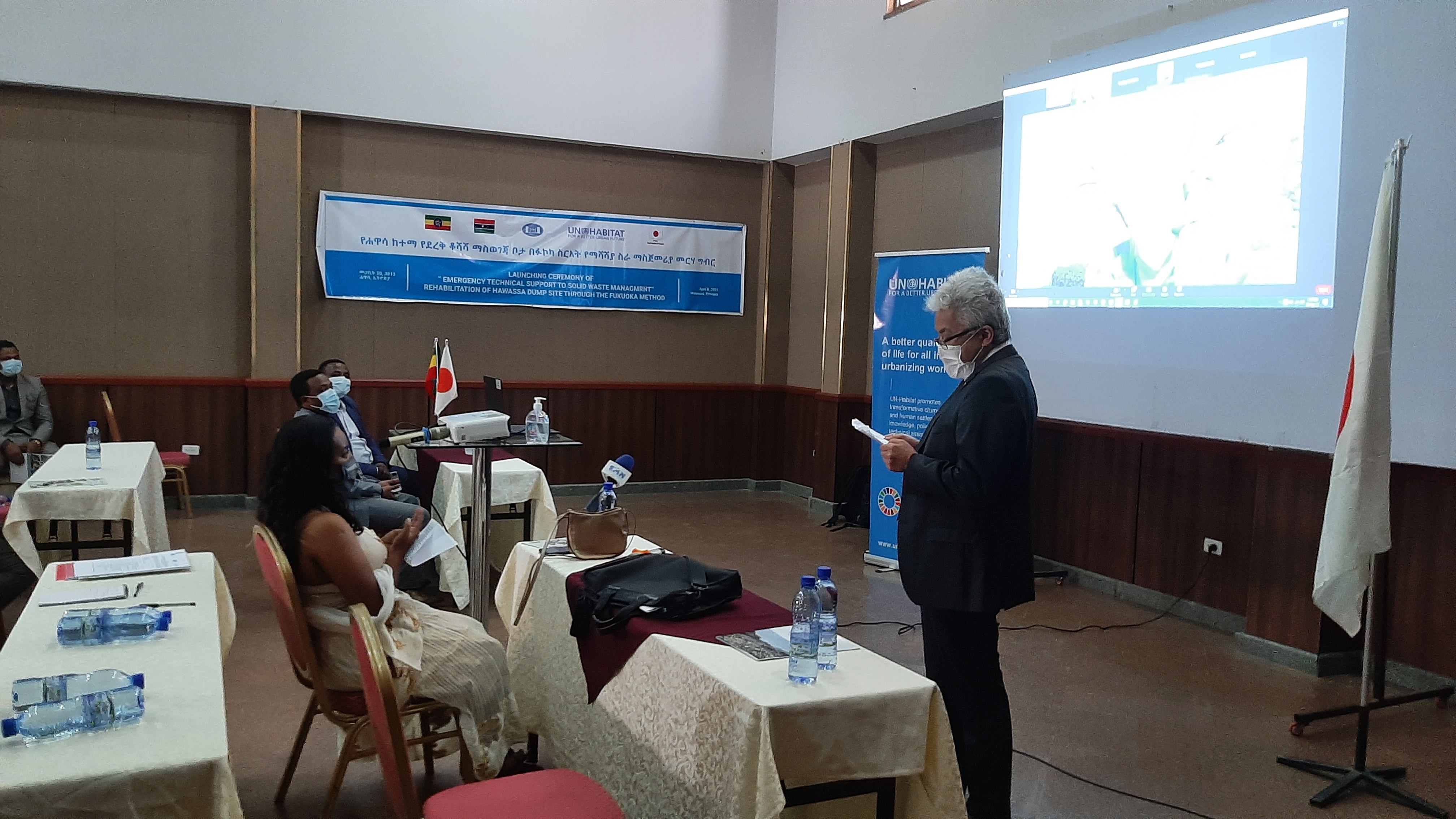 “We are therefore grateful for the launch of this project since it will improve the existing environmental and mitigate the social challenges associated with the existing dumpsite. It will also support the 2020-2030 vision of the city to be sustainable, livable and prosperous.

This USD 750,000 project is being funded by the Government of Japan as a follow-up to commitments made at TICAD7 in Yoko and implemented through UN-Habitat. With support from the Government of Japan, UN-HABITAT has successfully implemented open dumpsite rehabilitation projects in Addis Ababa and Bahir Dar since 2018. The successful implementation of the Fukuoka Method in the two cities has improved the quality of life for nearby communities by providing livelihood opportunities, in line with the New Urban Agenda.