UN-Habitat in Partnership with Africa

UN-Habitat has worked in many African countries for the past 36 years, and this growing portfolio is one of the most important for the agency.

As the urban population almost doubles in the next two decades the imperative of steering and guiding the growth process through urban planning becomes a priority undertaking. Equally urgent is the need to improve liveability and increase productivity of the city through expanding access to basic services. Indeed, Africa’s increased urban population is a powerful asset for the continent’s overall transformation. However, it can only attain its full potential when cities areproperly planned and adequately serviced. A major change is needed in the course of Africa’s urban development – a shift whose main thrust can be propelled by, first, a re-examination of the planning process and the delivery of basic services.

UN-Habitat is working with African governments to take early action to position themselves for predominately urban populations. 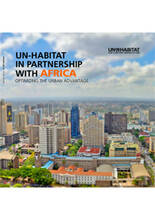