Amman 22 December 2014 - UN-Habitat organized a conference on December 16, 2014 in Amman, Jordan to finalize the results of the first ever credit rating project conducted in Jordan. UN-Habitat organized this conference in collaboration with the Muhanna Foundation in Lebanon and under the auspices of the Ministry of Municipal Affairs of Jordan. The objectives of the conference were to share the final results of the interactive credit ratings of five municipalities in Jordan and to hand over the credit rating certificates to the representatives of the five municipalities that participated in the project - Maadaba, Al Karak, Al Mazar Al Shamali, Al Shawbak, and Al Feheys.

Importance and objectives of the municipal credit rating mechanism highlighted

Mr. Al-Atoum, who represented the Minister of Municipal Affairs of Jordan, extended his Ministry’s appreciation to UN-Habitat and the municipalities. He emphasized the importance of the municipal credit rating mechanism for municipalities and municipal operations. He also emphasized the need to identify various strengths, weaknesses and available opportunities for municipal improvement and development in order to ensure the provision of improved operations and services and to deepen partnerships with citizens and other stakeholders. Mr. Ibrahim Muhanna, Chairman of the Muhanna Foundation, which conducted the credit rating stated “the municipal credit rating aims at evaluating the municipal creditworthiness and the ability of municipalities to meet their financial obligations on a regular basis and improving their access to the capital market. In addition, the creditworthiness benefits local authorities as a tool to assess their financial and administrative status. Furthermore, it will support donor agencies in understanding the operations of each rated municipality and help assess its capacity-building needs”. Mr. Gulelat Kebede, Coordinator of Urban Economy Branch of UN-Habitat, stated that credit rating is useful for municipalities as a management tool and that the credit rating process helps municipal authorities identify areas that need improvement, including revenue management, investment planning, management of succession planning and political involvement in municipal operations.Mr. Hweishel Akroush, Mayor of Al Feheys municipality, which is one of the five municipalities that participated in the project, extended his appreciation to UN-Habitat and the Muhanna Foundation for their contribution to the project. He highlighted the positive impacts of the municipal rating process both at financial and administrative levels. He also stressed the need for an active municipal participation in the rating project because it offers an independent opinion that would benefit the municipality at all levels - citizens, Ministry, lenders and the donors. Mr. Mohamad Bani Amer of the Muhanna Foundation presented the final results of the credit rating process. After handing over the credit rating certificates to representatives of the five municipalities, there was a panel discussion on the findings of the project by Mr. Ibrahim Muhanna, Mr. Dyfed Aubrey, UN-Habitat’s Regional Director for Arab States and Ms. Iman Zaki, Head of UN-Habitat Programme in Jordan. The conference was also used as an opportunity to promote services UN-Habitat can offer to local authorities in the area of municipal finance.

View it in pdf here. 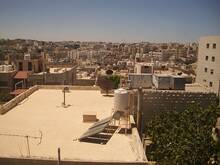