With generous contribution from the Government of Japan, the renovation of the residential houses of the returnees was implemented under the project titled “Promoting Urban Recovery in Newly Liberated Areas in Iraq” Located in the city-centre of Ramadi, Tameem neighbourhood was one of the areas largely damaged by ISIL and devastated after major military operations in December 2015, where buildings were destroyed and houses had been burnt down.

Upon request from Anbar Governorate, UN-Habitat rehabilitated 123 houses in Tameem neighbourhood for returnees’ families to ensure that they live in dignity, and in safe and secured accommodation. This project is one of four projects launched by UN-Habitat to facilitate return in Ramadi. It is inevitable that this kind of recovery intervention has been a positive factor in attracting returnees who were displaced and scattered across different cities.

H.E. Mr. Sohaib Al-Rawi, Governor of Anbar, stated that “Housing rehabilitation is critical to enable the return of the displaced citizens to Ramadi and in other cities” , and he reiterated his appreciation to UN-Habitat for the implementation of the housing rehabilitation community intervention and to all international agencies who are supporting stabilization and recovery in the retaken areas from ISIL.

Dr. Erfan Ali, Head of UN-Habitat Iraq, mentioned that two months ago the agency had accomplished the rehabilitation of the female students apartments in the University of Anbar in Ramadi, and now the agency has handed over the restored houses in Tameem neighbourhood and will continue its plan to rehabilitate 104 houses in the next phase which is under technical assessment and another 200 houses in early 2017.

“UN-Habitat’s intervention is community-based as the local community committees had played substantial role in coordinating and facilitating the technical assessment and the participation of more than 96 persons from the neighbourhood in the rehabilitation works in the first phase” as confirmed by the UN-Habitat’s head of Iraq programme who also acknowledged the important supportive and facilitating role of the Governorate of Anbar that enabled the accomplishment of the projects.

Mr. Raji Aied Assaf was born in 1953 and his family consists of 12 members. He was displaced to Baghdad with his family since June 2014 and returned to Tameem after his house was rehabilitated by UN-Habitat. He was really thankful for the assistance provided.The agency has contributed to restore the community stability in Ramadi through a rehabilitation process and accelerating the return of the families in this neighborhood. 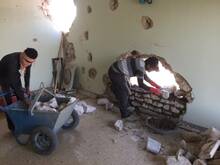 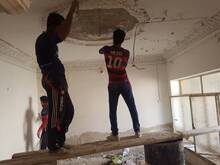 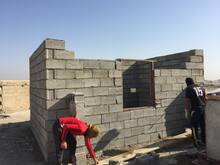