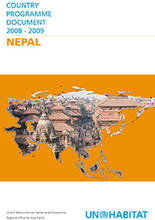 UN-HABITAT had been present in Nepal intermittently since the late 1980s engaging in a number of technical assistance programmes in the field of human settlements development. In 2005, the Water for Asian Cities was launched in the country focusing on water and environmental sanitation infrastructure and administration.

The primary governmental counterpart for this programme is the Ministry of Physical Planning Works and its relevant departments, while secondary counterparts are local authorities. As of September 2007, a Habitat Programme Manger has also been recruited to strengthen representation of the agency with government and the UN Country Team.

This UN-HABITAT Country Programme Document (HCPD) has been developed in the context of a historically significant political transition that is taking place in Nepal at present. The HCPD attempts to address key urban development challenges and priorities on the thematic areas of land and housing, shelter and basic services, capacity development and urban governance.