Bonn, 11 June 2014: UN-Habitat has chaired a dedicated cities forum at a conference held by the United Nations Framework Convention on Climate Change aimed at highlighting sustainable urbanisation as a key factor in addressing global climate change.

The forum is part of the Ad Hoc Working Group on the Durban Platform for Enhanced Action, known as ADP2014, and brought together key actors from the global debate on climate change.

The session was chaired by UN Assistant Secretary-General and UN-Habitat Deputy Executive Director, Aisa Kirabo Kacyira. In her closing remarks, she emphasised the importance of sutainable urbanisation in tackling climate change.

“It is in cities where the battle for sustainable development will be won or lost”, she said. 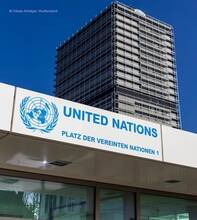