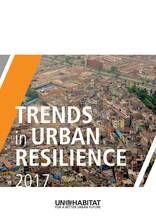 Over the past decade, resilience has been gaining ever greater prominence in the international development discourse, emerging as one of the core principles of sustainable urban development in the post-MDGs framework. Between 2015 and 2016, resilience featured as an important theme across six major global agendas: notably the Sendai Framework for Disaster Risk Reduction 2015-2030, the Addis Ababa Action Agenda, the Sustainable Development Goals, the Paris Agreement on Climate Change, the World Humanitarian Summit Commitments to Action and the New Urban Agenda. The latter, which was formulated in Quito on occasion of the United Nations Conference on Housing and Sustainable Urban Development (Habitat III – October 2016), and signed by 167 countries, sets the global standard for achievement in sustainable urban development for the next two decades.

The publication’s purpose is to account for this unprecedented global momentum for resilience-building from an urban standpoint: inquiring the trends that drive the theory, investigating how these were gradually incorporated in development agendas, mapping the diverse landscape of actors involved, and analysing how this perspective shift can be translated into forward-looking urban policies and practices. As follows, the document is framed across five main chapters