Towards Sustainable Urban Development in an integrated vision Cabo Verde

Cabo Verde is beyond its urban tipping point with currently 64.8 per cent. While the urban growth rate has reached its peak, the current growth rate of two percent annually will have important implications for future spatial configurations, resources and land use.

This brochure describes the work carried out by UN-Habitat in collaboration with the Ministry of Environment, Housing and Territorial Management of Cabo Verde in recent years, which has consistently focused on sustainable urban development. 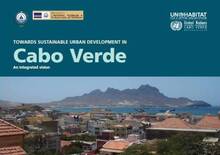