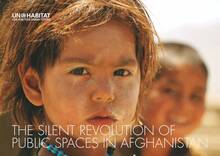 The Silent Revolution of Public Spaces in Afghanistan (Koussay Boulaich, Ahsan Saadat, Suhail Mayel) is the untold story of hope and peace in urban areas. The provision of public spaces in cities across Afghanistan is shaping the lives of the citizens, especially women and the poor, and the relationship with their cities. It is a social and cultural revolution that has empowered women, created jobs for the poor and improved the living standards of the citizens. It is a silent and peaceful revolution that has transformed the people and the city, building trust and confidence in public institutions.

This photobook serves to portray the Afghan government’s response to the immediate urban challenges through impactful photos and stories. The book presents a series of human stories narrating the impact of public spaces in the lives of ordinary citizens, internally displaced persons by the conflict, women, government officials, workers, community members and kids. It captures an unknown sense of positiveness and transformation of public spaces in remote urban areas difficult to reach.

The Silent Revolution of Public Spaces in Afghanistan is an empirical demonstration of the strategic relevance of urbanization as an endogenous source of prosperity, peace and job creation. It is an example of the important interconnection between urbanization, development, peace and stability in the context of war and conflict.