The Evolution of National Urban Policies – A Global Overview 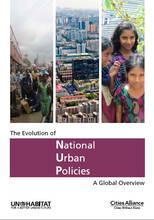 More than half of the world’s population currently live in cities, and a projected 70 per cent will be living in urban areas by 2050. Urban settlements are growing and will continue to grow whether this is planned or they simply spread. Much of the way in which cities progress, stagnate or become dysfunctional depends on the extent to which their evolvement is planned, coordinated and well-managed. These factors, in turn, depend on the skills, money and political will being available and used in the best possible way to improve the lives of millions of people. The alternative is poor transport networks, insufficient water supplies, public health crises and slum settlements, among other things.