Megaprojects such as infrastructure development or industrial parks can have a major impact on the economic, social and environmental conditions of entire cities and their residents, for whom the investments should ideally generate benefits. A study of urban and regional development in Belarus has enabled UN-Habitat to analyse integrated planning and implementation of urban development projects in the city of Minsk and development of a new industrial park outside the city.

The China-Belarus Industrial Park ‘Great Stone’ targets global economic development with local impact. Up to 145, 0000 people will live and work in the 207 sq. km area of the park, a key element of the Chinese Silk and Road Economic Belt initiative. The Park will develop the potential of Belarus as a link between the European Union and the Eurasian Economic Union. Companies operating out of the park will receive preferential financial support and other incentives, and in turn will be expected to comply with strict government regulations aimed at protecting the Park, the environment, and the livelihoods of residents in 15 villages and natural reserves located within park territory.

Companies already residing at the Park demonstrate how the Park can generate employment and encourage innovation for traditional industries. Until recently, the MAZ Minsk Automobile Plant of the Minsk automotive cluster did not produce its own engines. Now MAZ engines and super capacitors produced at the Park are being used by eBusses on the streets of Minsk.

While UN-Habitat is not involved in the development of the Park its research on urban and regional development in the Minsk city region has been useful in understanding how sustainable urban development is possible in the context of mega urban projects.

So far, the Economic Commission for Europe, UNECE and UN-Habitat have organised three fact finding missions to Belarus comprising of expert meetings and policy dialogues. In June 2018, UNDP and UN-Habitat jointly organized a workshop on implementing International Guidelines on Urban and Territorial Planning and its adaptation to regional planning (IG-UTP) to establish national priorities for the Republic of Belarus and learn from international best practices. The first country profile of Belarus was published in 2008 and focused on the housing sector and land management. The Country Profile for Belarus will be officially launched in May 2019 at workshop to be organized UNECE, UNDP and UN-Habitat. 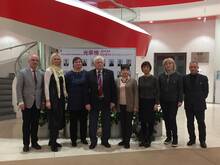 Joint delegation of UNECE and UN-Habitat with the Chief Architect of the Park, Victor Ivlichev (fourth from left)
Image 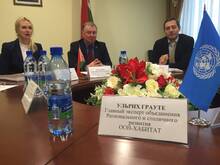 Aliaksandr Kruchanou (centre), First Vice Minister of the Ministry of Architecture and Construction and representatives of the Ministry of Foreign Affairs and other national institutions met the joint delegation of UNECE and UN-habitat in Minsk.
Image 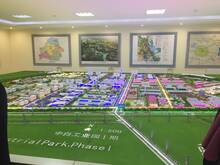 Model of phase 1 of the Industrial Part ‘Great Stone’ near Minsk
Categories
MEDIA CENTRE
We’re rebuilding! If you can’t find what you’re looking for, please check the old website.